The number of Bitcoins mined on GHash.IO has gradually been increasing from August 2013 to August 2014.

Several elevated points are obviously present — October 2013, January 2014 and June 2014. From August 2013 to October 2013 the rise of Bitcoins mined at GHash.IO was rather drastic — the amount of Bitcoins tripled in October 2013 comparing to August 2013 totalling in 32,250 BTCs. The amount of BTCs mined at GHash.IO stabilised in November 2013 and continued to grow throughout December 2013, reaching another peak in January 2014 with the total of 41,200 BTCs. From February 2014 to April 2014 we see a slight drop to the amounts of October and December 2013. In May, the number of Bitcoins mined on GHash.IO started growing again reaching its annual climax in June and then slowly decreasing again in July and August. 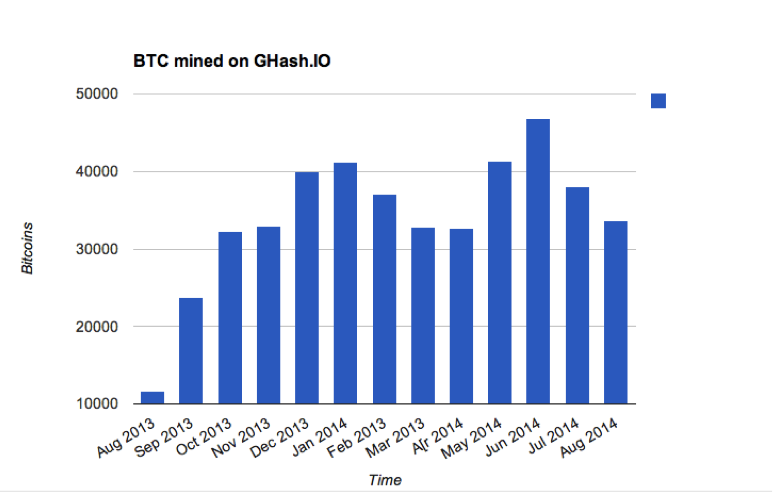 These elevations correspond with the increase of the Bitcoin price, which in turn resembles the enhancement of cryptocurrency’s popularity. The peak of January 2014 and June 2014 are connected to the mining pool’s proximity to gaining 51% of the Bitcoin network’s hashing power. This initiated numerous discussions regarding the necessity of finding a short-term and, hopefully, a long-term solution to the 51% problem. After the Coinsummit in London on mid-July 2014, GHash.IO announced that the company would “not exceed more than 39.99% of the overall Bitcoin hashrate. If GHash.IO approaches the respective border, it will be actively asking miners to take their hardware away from GHash.IO and mine on other pools”.