When visiting the GHash.IO website, it’s important to make sure that you completely understand all of the information that is being thrown your way. There are a large number of mining statistics available to the individuals who wish to join the mining pool, and these stats can be helpful when it comes to gauging your investment over the long term. The “Last Blocks” spreadsheet on the GHash.IO will tell you everything you need to know about recent blocks that were mined by the Ghash.IO pool. Let’s take a look at each individual stat found on this sheet to make sure you know exactly what it is that you’re reading.

The ID is a number given to each block that is mined by the GHash.IO mining pool. This is simply a unique identifier that can be used to reference a certain block at a later date. A block only receives an ID on the Last Blocks spreadsheet if it was mined by the GHash.IO mining pool. The IDs are handed out in order of when the blocks were originally mined.

The Completed column on the spreadsheet points to the specific time that the block was mined. This information can be useful when searching for a specific block that was found during a certain time period. 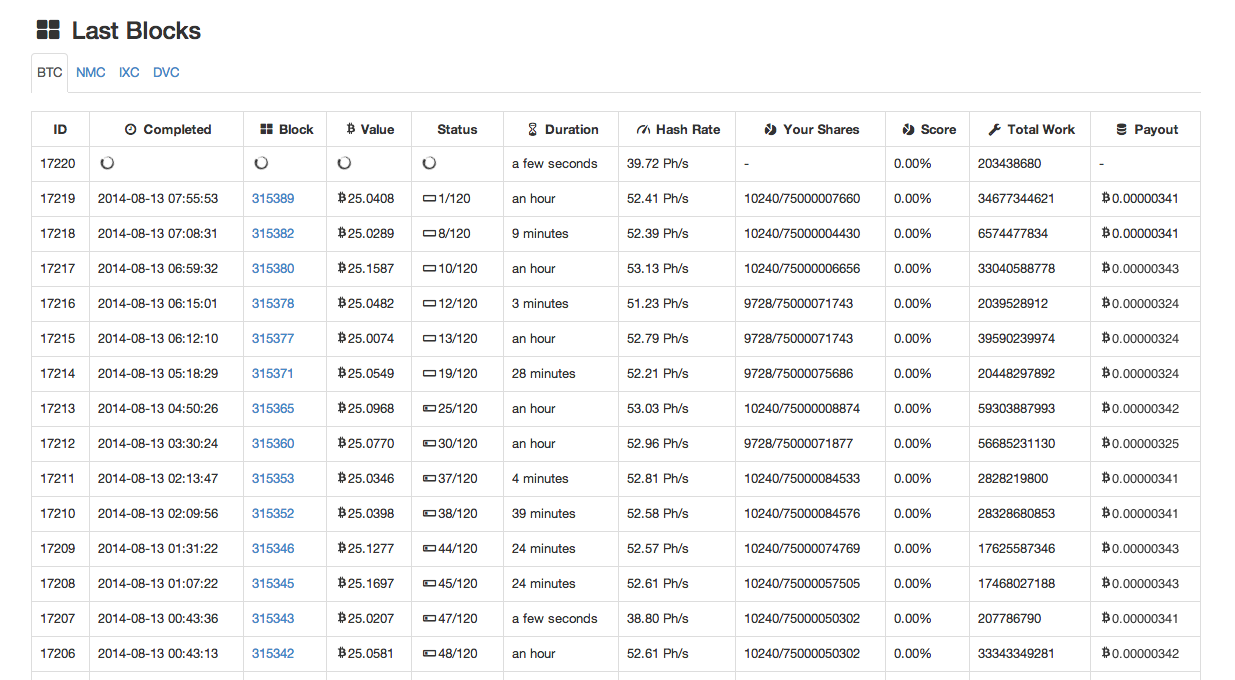 The Hash Rate is the amount of hashing power provided by the GHash.IO mining pool during the mining of that particular block. This is not the network hashrate of the entire Bitcoin network.

Your score is simply the percentage of your shares of mining power as compared to the rest of the GHash.IO mining pool.

Most cryptocurrencies are still based on proof-of-work, so the Total Work column is the amount of work output by the entire GHash.IO mining pool in order to mine one block. It should be noted that the work from previous blocks which were not mined by GHash.IO are also included in this number. Work is basically the number of computations run by the entire GHash.IO mining pool during the search for a block reward. The amount of work that is needed to actually mine a block is closely related to the current Bitcoin difficulty.

This is your personal payout from a particular block mined by the GHash.IO mining pool. Your payout should be proportional to the amount of the overall mining power that you own in the pool.