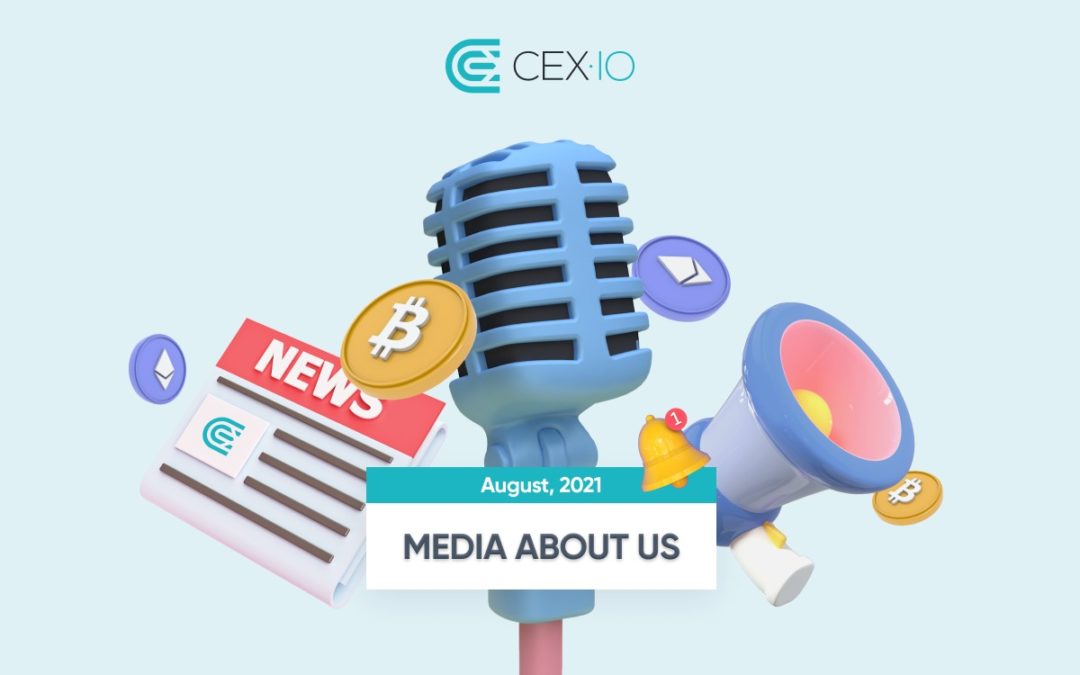 Good times are coming. At least such a prediction now looks more likely as markets begin to show really positive dynamics for the first time since May.

Discover the hottest crypto news and events together with the experts from CEX.IO.

In August media coverage, we talked about:

We’ve put together all the juiciest stuff in this post for your convenience. Enjoy!

In the past few months, UK regulators have introduced increased scrutiny around the cryptocurrency industry. Besides the mandatory requirement to get licensed, digital asset businesses must be careful about how they advertise their services to consumers. At first glance, this growing pressure on service providers might seem bad news for the market. However, if we take a closer look, regulation protects investors and offers long-term benefits for the licensed service providers and maturing cryptocurrency sector, said Konstantin Anissimov.

The cryptocurrency sector has changed dramatically over the past two years, leading to widespread growth and interest in the space. This includes an increasing shift towards institutional investors, which have carved out an important niche moving forward. Given this evolution, many have questioned what can still be done to improve the industry. Finance Magnates hosted a live webinar that delved into the metamorphosis undergone by the cryptocurrency sector over the course of 2020-2021. Konstantin Anissimov, along with other participants, discussed the position of institutional investors in crypto, lending on their unique expertise and vantage point in the industry.

What needs to happen in crypto to entice more institutional investors?

It is important to continuously educate people on the benefits of new solutions. And the more people understand the benefits, the more retailers will be ready to use Bitcoin as a payment means. The growing number of participants in this market will blur the boundaries between the crypto and traditional economies and will make us look for new, interesting solutions. Konstantin Anissimov is confident that paying for coffee with Bitcoin will most likely become a new reality.

Poly Network confirmed that the hacker, who is called Mr. White Hat, had returned the $610 million in stolen money. $33 million in Tether remains frozen by the stablecoin’s parent company, which Poly Network said it was working to restore.

Also, the hacker issued a message on the Ethereum blockchain explaining their rationale for delaying returning the stolen funds. The hack initially occurred on August 10, with about half of the money returned the following day. “Such big hacks as this (with white hackers or not) actually improve the overall security of all DeFi services. Other teams tend to learn from the mistakes and failures of others and make their projects more secure.”, said Dmytro Volkov.

With trading bot scammers still on the prowl, many more traders will continue to lose money to this type of scam. This begs the question: Who should use a trading bot? How does one know if a purported trading bot is in fact a scam? Dmytro Volkov concedes that some trading strategies do require quick actions and calculations. He says since humans cannot perform such trading strategies this task is left to a trading bot. However, according to the CTO, the “most successful trading strategies still require constant supervision and guidance from experienced high-skilled human traders – quants.”

The rise of fake crypto trading bots: steps users must take to avoid getting scammed

Youtuber Matt Wallace noted the internationalization of the DOGE rally in August and the shifting of action to Binance, a major cryptocurrency exchange. Meanwhile, Cardano’s Alonzo upgrade that will usher in smart contracts would be launched on Sept. 12, as per Nigel Hemsley, head of delivery for the cryptocurrency project. Yuri Mazur, head of data analytics at CEX.IO said, “Cardano’s highly anticipated Alonzo upgrade is also a good reason for investors to stack up the coin,”.

Dogecoin shoots up over 17%, Bitcoin, Ethereum continue to soar but roadblocks just ahead

Cardano surged above $2 for the first time in almost three months after the blockchain’s lead developer revealed a September release date for the planned Alonzo update, which would provide smart-contract capabilities. Cardano’s smart-contract feature would let it integrate new applications, such as decentralized finance (DeFi) systems that automate bitcoin lending and trading. The enhancement may help the network challenge Ethereum, which is now the top among blockchains that support smart contracts. Yuri Mazur said, “Any rise in the price of cryptocurrencies is either directly triggered by favorable news pushing up sentiments among purchasers or a growth in line with the broader market trend.”

The world’s largest cryptocurrency was up 6% on August 20 and has broken the $48,000 mark for the first time since May. The recent price rally is not indicative of a massive jump just yet, according to Konstantin Anissimov. However, he said that if more buyers dive in to push the price above the $50,000 level, a frenzy could be ushered in to steer the price toward a target of $55,000.

Bitcoin breaks $48k for first time since May

In the second half of August, Bitcoin has been trading in a range between $45,000 and $51,000. Every time it has seemed to pick up momentum and ready to break past this range, it has been rejected at critical levels and retraced. On August 16, it was rejected at $48,000 and retraced to $44,000. It again picked up the pace and after testing $50,400, it was once again rejected and lost over $3,700. These price turns, especially the drops, are not unexpected. However, according to Yuri Mazur, they can have a drastic effect.

Exclusive: Data wizard talks what to expect this weekend for BTC as $50K resistance persists

CEX.IO Broker has announced that it has eliminated all fees and commissions, becoming the first commission-free crypto margin trading platform in the world with this unprecedented move.

CEX.IO Broker understands how fees can alter the financial outcomes of trading strategies. That’s why CEX.IO Broker introduced commission-free trading on its digital asset margin trading platform. This move was supported by the platform without fearing that the fees would take away a great portion of their profits.

How has your trading experience been as of late? Would you rather hodl ADA or BTC? Share your thoughts and feelings on our Telegram channel https://t.me/CEX_IO.

And don’t forget to follow the world’s crypto news with us because, with CEX.IO, you’re surely in good company.