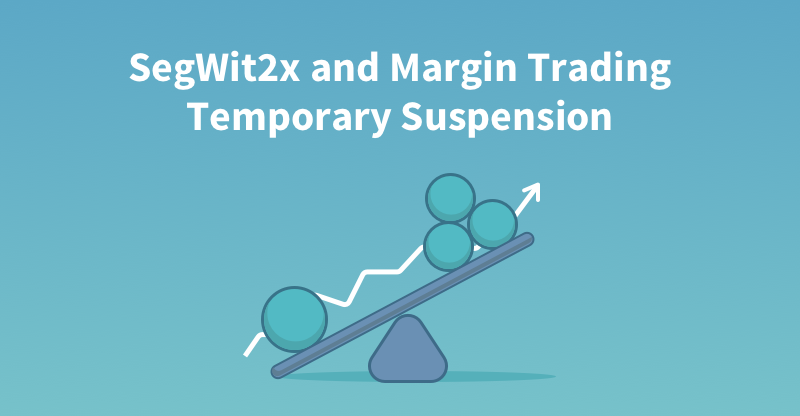 As the SegWit2X fork is approaching, we would like to update our customers on the actions we plan to undertake in the nearest future. In our previous statement we announced that, after the chain is divided into two, all our users who will have BTC on their balances at the moment of the fork will receive the new B2X coins. The trading pairs of B2X/BTC and B2X/USD will also appear on the platform.

We believe all our users have to benefit from the future fork and intent to make it technically correct, avoiding any potentially arising issues. That is why we want to draw your attention to the fact that it is not clear what chain will follow the initial rules and which will conform to the new protocol. Besides, considering the concerns about the SegWit2X replay protection, there exists the risk of transactions being reflected on both chains.

This uncertainty about the expected SegWit2X fork has led us to the decision to temporarily stop margin trading on our platform.

We would like to emphasize that it is a short-term measure taken to avoid confusion around the split chains. And as soon as the situation with balances and coin splits stabilizes, trading on margin will be available again.

Besides, as announced earlier, we plan to temporarily disable BTC deposits and withdrawals on the platform. It will happen approximately 10 blocks before the fork. And as soon as we ensure that everything is stable, the mentioned operations will be enabled as always.

Concerning the operations involving the new B2X coins, we will provide the opportunity for our users carry them out later. We also have to emphasize it is necessary to be very attentive when making the latter transactions, as various services may refer to the two blockchains in different ways.

In any case, we will keep you updated about any changes. And we guarantee that our team will do their best to ensure that you receive the highest benefits.

Now, take a chance to buy some Bitcoins on CEX.IO and receive the new coin after the fork!