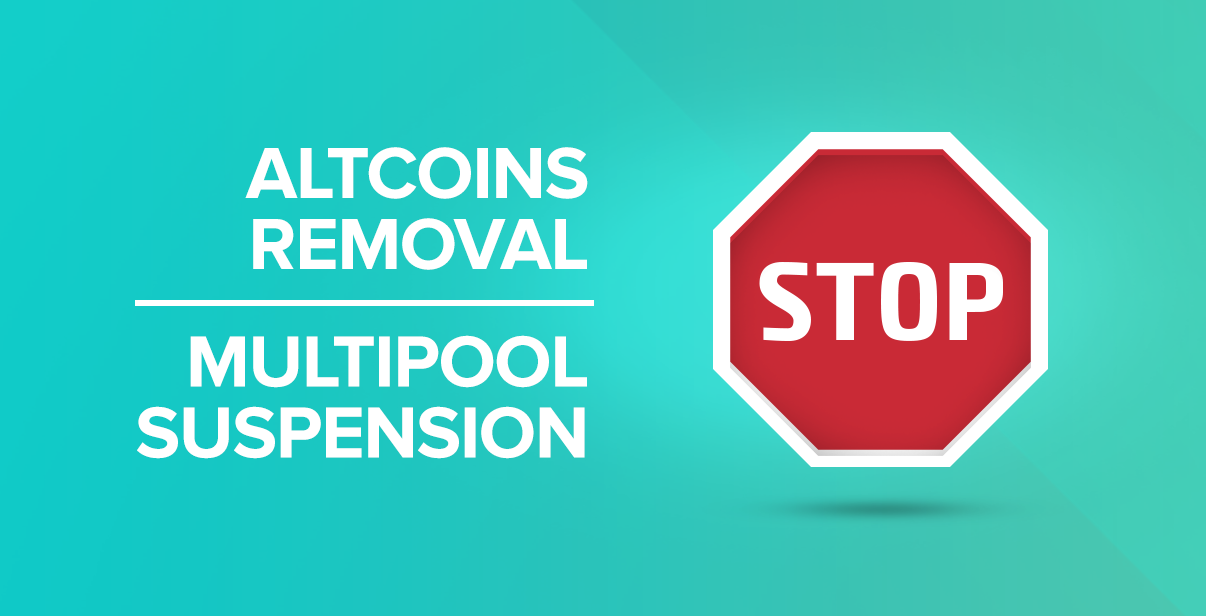 We at CEX.IO have decided to focus on higher volume markets such as BTC and LTC, which would allow us to provide you a better exchange service and trade opportunities. Thereby, please be informed about GHash.IO Multipool suspension and removal of altcoins.

December 1st, 2015, GHash.IO Multipool will be discontinued. Mining of IXC and DVC will be stopped as well. There is no need to change mining settings for the Multipool, as all shares will be automatically redirected to LTC+DOGE mining pool. Those users who are already mining on Multipool and LTC+DOGE pool simultaneously, please make sure that workers on both pools are titled differently.

All DOGE and NMC trading pairs will be removed from CEX.IO exchange on December 15th, 2015. Merged mining for LTC+DOGE and BTC+NMC will continue as before.

DOGE and NMC wallets will remain on CEX.IO exchange with an option to withdraw coins.

Here are the options available to users who own aforementioned altcoins on CEX.IO:

1) If you own amounts that are high enough to trade or withdraw, we recommend converting to BTC or LTC or withdrawing your coins to a respective wallet.

2) If the number of coins on your wallet is too small to do either of those actions and you still wish to withdraw or convert them, you can deposit extra coins to your wallet so that the total sum is larger than the minimum trade amount or the respective blockchain transaction fee.

IMPORTANT: We will be imposing a wallet fee for storage of some discontinued altcoins, which will be used for running the support of the wallets. The fee will be charged in respective altcoins and will be equivalent to 0.00015 BTC per wallet per day, till the balance on the respective wallets reaches 0. In order to avoid this fee we recommend converting your coins to BTC or LTC.

Wallets on which the wallet fee will not be imposed:

If you have any questions, please send a ticket to support.

We’re bringing new listings as well as a feature our U.S. users have long been demanding — CEX.IO Staking.

Good news! CEX.IO is cutting its trading fees to help traders with optimizing their operations. Check out the updated fee schedule!