Is the breakout on hold? 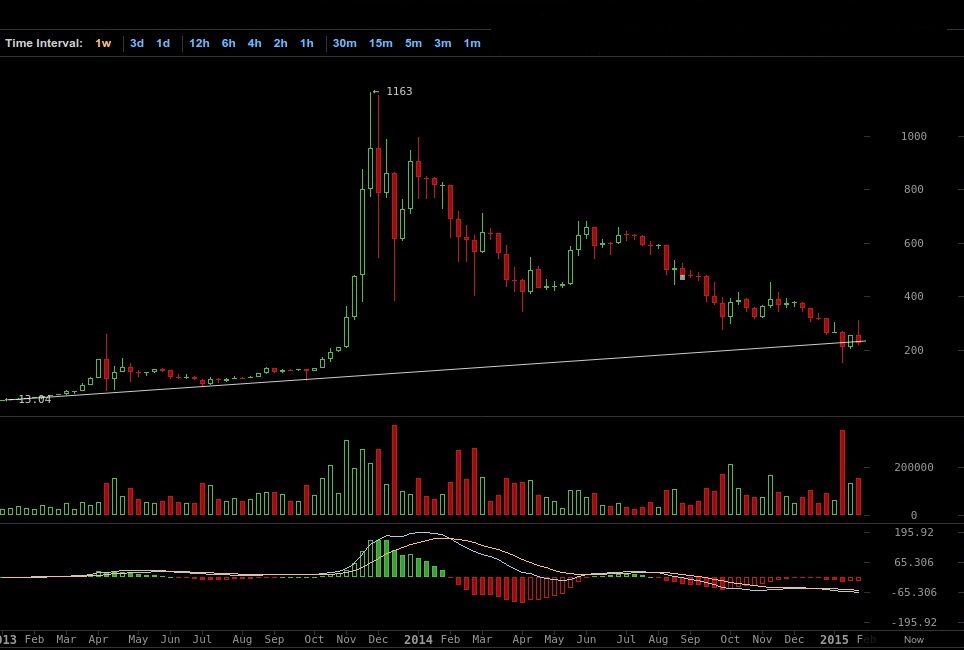 In last week’s bitcoin price analysis, I concluded a weekly forecast with bearish expectations from $250 prices at the time. In case you missed it, here is a quote from last week

“This week I expect bearish prices with targets as low as $166 and possibly lower. Currently, there is no sign of buying pressure enough to take the market past $300”.

This week, prices popped into low $ 210 levels but, not before mixed signals on price action. Prices have maintained a truncated sideways trend that bottomed at $210 on Wednesday, subsequently topping off at $240 on Friday. 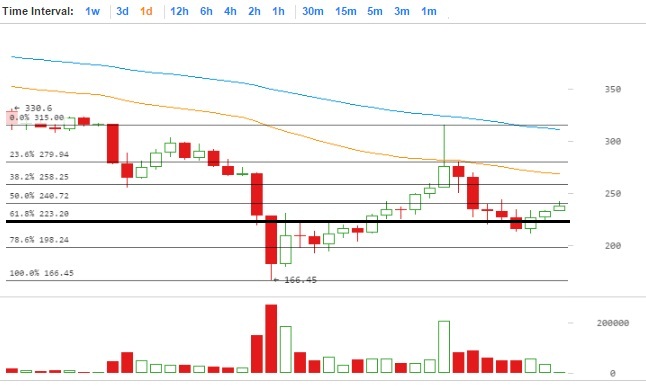 Price this week was bound within a range ($210 – $230 zone) with a Fibonacci centre line $223 (61% fib level). It was a chance to scalp on repeated up and down action that was pretty obvious for short-term traders. Right now, the trend resembles a flat correction; seemingly indecisive and teetering on the edge anticipating a breakout on either side. This has happened before, and in the past, bears have won dumping coins and forcing the market even lower. In light of the most recent bottom ($166) their sway on the market has diminished and any break to the bottom now would be limited to above $150.

Looking at charts, the obvious price is sideways in tandem with BBA bands moving average. On the 3 day, 1 day, and 12 hour chart, there is no sign of breaking a long-term trend. The 50 day and 100 day EMA are above our price movement. Any change in the long-term trend will have to be either BIG news that rallies unexpectedly or tests these resistance levels or, gradual uptrend in price from within lower timeframes and eventually exhibited in longer time frame charts. So far, we are still in a bear market.

In the short-term however, outlook is ambivalent on the 6h, 4h and 2h. RSI is still within the acceptable range (70 and 30) and could go both ways. MACD indicators also point to a short-term stability and market ambivalence as to where next.

An imminent breakdown in price and lower prices are likely if we go ‘únder’ US $210. Read on for this week’s price forecast.

There was little positive fundamental news coming out this week. Conversely, two events happened that are a setback to bitcoin’s progress towards a better image.

Ross Ulbricht, former boss of Silk Road, was found guilty on 7 charges after a 4 hours deliberation by the. Since the FBIs seizure of Silk Road and subsequent halt in operations, government prosecutors have pursued this case to this end. Revelations during court proceedings shed light on internal workings of this dark marketplace. Ironically, history will remember Silk Road as a key turning point for bitcoin. No matter what anyone says, Bitcoin is partly where it is today because of the Silk Road dark market. Ross Ulbricht will always be part of that history.

Bad news from a major financial centre, Hong Kong as the Central Bank issued a warning against investing in bitcoin and virtual currencies. Albeit not an unusual move from a Central Bank (echoing other Central Banks), circumstances drawing this response were unfortunate. Reportedly, Mycoin.hk – an investment vehicle, absconded with an estimated $347 million worth of investor funds. Reports from HK and China suggest investors were promised interest returns of 90 BTC each month for a principal of $400,000. Shrouded in mystery, the specific figures on this illegal scheme are debatable. New York times ran a story on this today.

The best advice from this incidence is to store your own bitcoins! Otherwise, make use of multi-signature wallets. 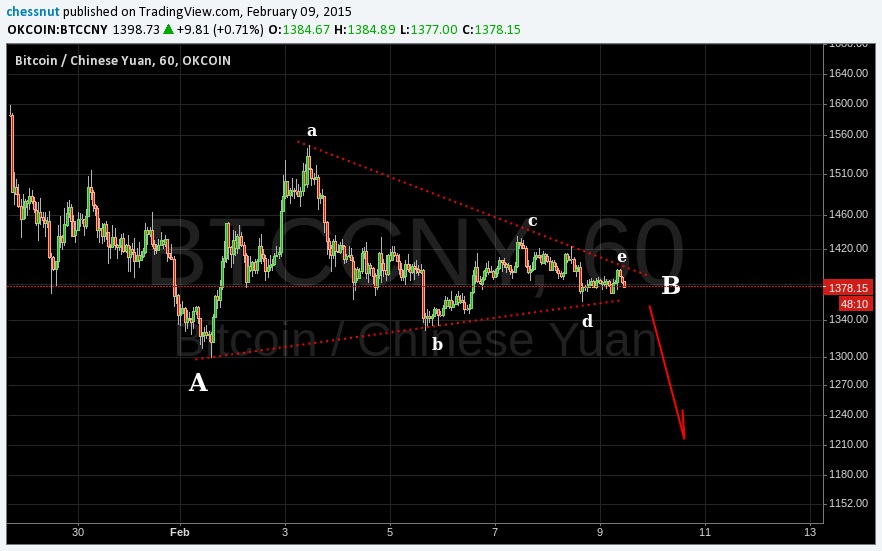 This week my outlook is bearish and I expect prices to take a dive lower — possibly down to sub $200 levels; unless, bullish news events occur that terminate this outlook.

With nothing to ignite a rally an upside breakout, price action sideways will persist till a decisive breakout. EW analysis on hourly time frames show a triangle encompassing a 5 wave structure in a flat correction. Triangle patterns precede terminal moves; this breakout will be on the downside as the correction was a reprieve of the overall bear trend. A crystal clear triangle has no place in a bull trend; combined with an expanding diagonal

I reasonably expect the market to break to the downside and expect prices to test $210 support, $200, $184 and $150 thereafter. Final bottom? Perhaps, but it is vital to stay objective as a trader. When the bottom is in, you will find out here first. 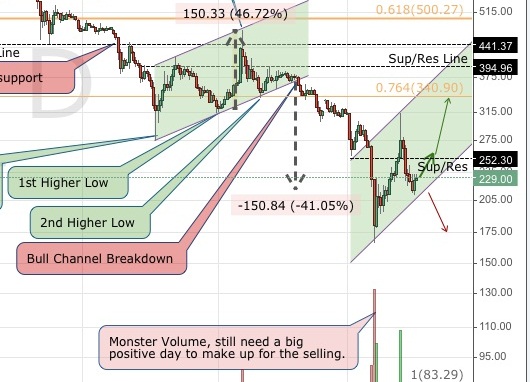 I also have a low probability bullish forecast based on the fact that $200 – $210 range has held well. Trend reversals occur in double bottoms. $166 bottom – up to $250 – and down to $210. Albeit a remote possibility, this range could sustain itself long enough to move up and retest $315. This would mark a change in trend.

A final word to keep you objective and focussed on the bigger picture is this thread on bitcointalk.org from 2011! On this thread, traders were discussing prices of $2.5 after a drop from $29.35 and whether bitcoin was doomed. 4 years later and we went up to $1200 and now at $216 debating how long this price decline will persist. I recommend reading through the discussion. Otherwise,

“If this [bitcoin] works it will be the greatest investment we ever made and will ever make.”