In recent years, the cryptocurrency industry has experienced a boom in the adoption of proof of stake (PoS) blockchain networks. The rise of PoS consensus mechanisms has made “staking” a popular activity in crypto. Participating in PoS networks, aka “staking crypto,” is an easy way to contribute to a blockchain network’s development.

Staking can be a difficult topic to understand. This guide is designed to make staking on CEX.IO as smooth and easy as possible.

Staking is the process of supporting a blockchain network’s operation. Where proof of work networks like Bitcoin require mining to keep the blockchain secure, proof of stake networks like EOS, Tezos, and Cosmos are low maintenance.

Staking is a process that allows users to earn crypto by pledging a portion of their holdings to the network. At a glance, staking appears to work like a savings account, where the bank pays you interest over time for storing funds. But staking works in a completely different way.

While the details vary between different PoS networks, staking usually allows users to contribute to the blockchain network, taking part in transaction validation and governance. The users responsible for confirming blocks of transactions are known as validators. Once a new block is added to the blockchain, new coins are “minted” into existence. The network will reward the validator and users who staked based on a predefined formula.

Note that not all cryptocurrencies support staking, only those where the blockchain uses PoS or similar consensus algorithms (i.e., delegated proof of stake). Bitcoin cannot be staked, for example, because it works using the proof of work (PoW) consensus algorithm. Bitcoin relies on mining instead of staking.

How does CEX.IO Staking work

CEX.IO makes staking assets easier than ever. All you need to do is purchase stake-able assets and leave them in your account.

Once stake-able coins are purchased or deposited into your CEX.IO account, you can start staking. The staking process is automated. As long as you keep stake-able coins or tokens in your account, CEX.IO will stake them for you.

If you don’t have stake-able coins on your CEX.IO balance and want to start staking, then: 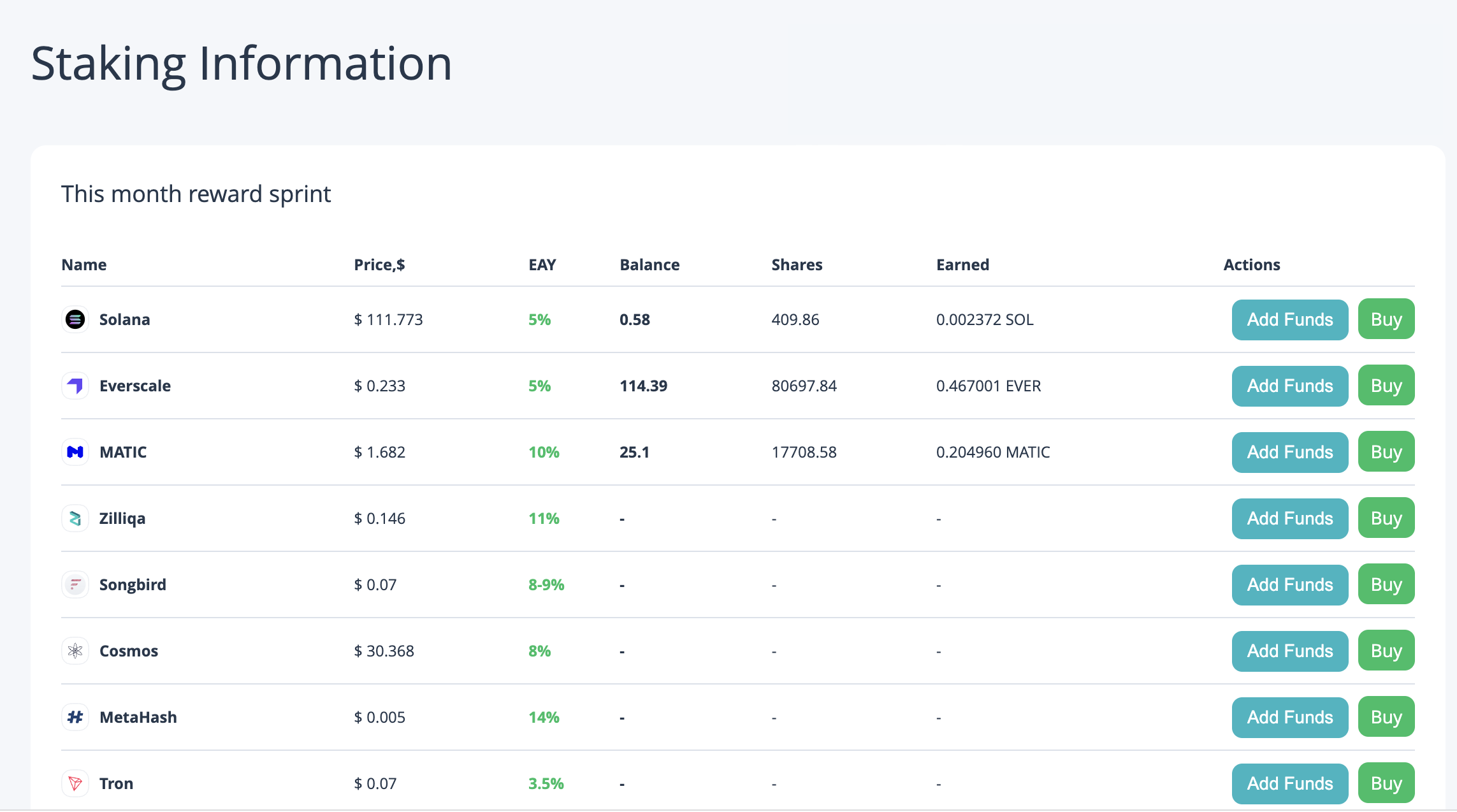 Please note: CEX.IO has a minimum amount required for staking. In order to stake supported cryptocurrencies, the minimum amount must be held in your account. If your crypto holdings are below the minimum, then you will not be eligible to receive staking rewards. You can find the minimum holding requirements on our Staking page.

To earn staking rewards, you just need to store stake-able cryptocurrency in your CEX.IO balance. But it doesn’t mean that you can’t do anything with your crypto, while you stake it.

Some exchanges and staking providers lock staked coins to allow users to participate in staking. At CEX.IO, your funds are not locked and there is no lock period, meaning you don’t need to wait to return your funds from the staking node. A detailed explanation of our staking approach under the hood can be found in this blog post.

We strive to provide flexibility to our users and offer staking services without restricting users from interacting with their cryptocurrency. Since coins are not locked, it presents multiple opportunities for our users. You can:

When you stake crypto on CEX.IO, there are no limits on how many assets you can stake. The ability to stake one, two, or all of the supported cryptocurrencies makes it easy for users to build a staking-oriented portfolio.

Staking is an integral part of the CEX.IO ecosystem, and we continue working on expanding the list of supported cryptocurrencies for our staking services. CEX.IO Staking has become a convenient option for users to earn passive income in crypto. It could be a nice addition for active traders, allowing earning crypto by trading and staking simultaneously. Long-time investors may also benefit from staking, making their crypto work for them. Interested in staking on CEX.IO?

The DeFi industry has unlimited potential, but it has felt the pressure of the bear market alongside crypto as a whole. In this article, we dive into the current state of DeFi.

Learning to Go with the Flow: Liquid Staking and the Potential for Asset Mobility

Learning to Go with the Flow: Liquid Staking and the Potential for Asset Mobility

We put this post together to help recap how staking works, what sets liquid staking apart, and what to watch out for as network participants.

Bitcoin miners continue to face challenges amongst the continued selling pressure in the industry. Have miners seen the worst of it, or are more troubles on the way?