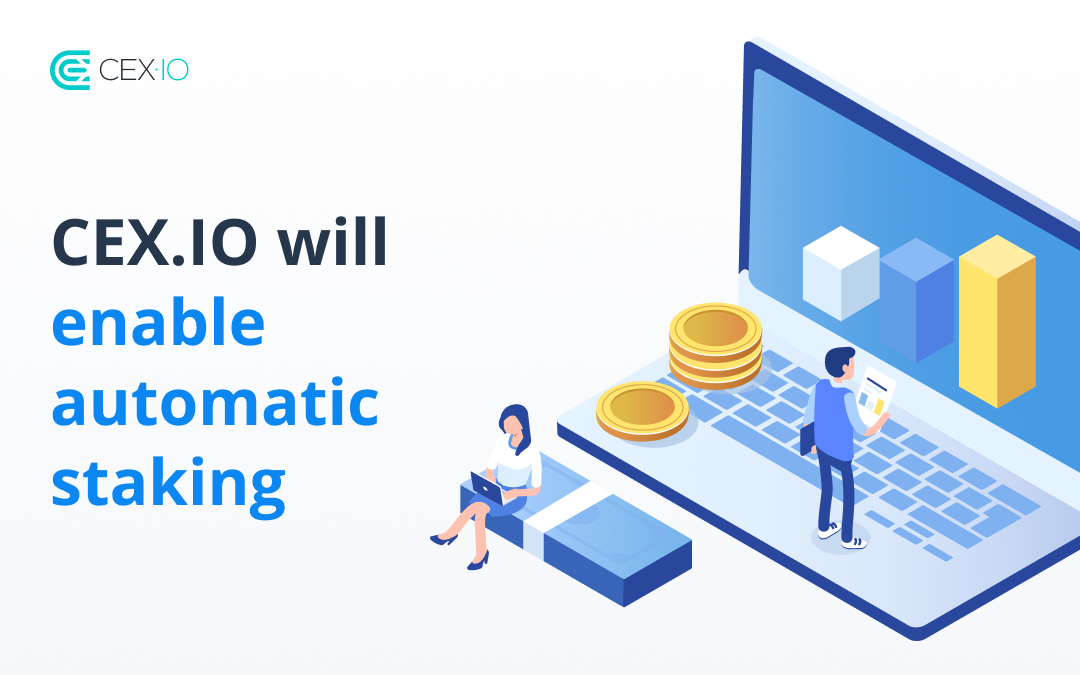 As a cryptocurrency exchange with a mission to guide our clients into the world of open finance, we always explore ways to help our users participate in the crypto economy. In 2019, “staking” has become the household term in the cryptocurrency industry, and we, at CEX.IO, certainly want to explore this direction for our users, too.

As the resolution goes, “New Year, New Features“! So, enabling staking for our clients is high on that new features list! Right now, our engineers are in the final stages of polishing the staking function at CEX.IO. We are looking to have it go live soon with a few stake-able coins right off the bat!

In this post, we want to outline our vision of providing staking opportunities to our clients and describe how CEX.IO is uniquely positioned to deliver this service.

In recent years, we’ve witnessed an emergence of various blockchain projects choosing Proof-of-Stake (PoS) as a consensus mechanism and an alternative to the popular Proof-of-Work (PoW). Demonstrated by Bitcoin, PoW-based networks had a very limited capacity for the number of transactions such networks could process within a fixed period of time. Even Ethereum, an originally PoW-based network, to improve scalability, has opted towards an eventual switching to a PoS form of consensus. Compared to PoW, PoS had the potential to solve scaling problems – the necessary improvement for blockchain technology adoption.

With clear advantages, however, PoS also brought about another highly debated issue — centralization. PoS consensus concentrates decision-making power within a small group of the largest coin holders, something contrary to the ideals of a decentralized economy.

Consensus participants receive coin emissions issued by the network in return for deploying their resources to facilitate network transactions. With PoS, these few large holders would only become even larger and monopolistic.

The appearance of Delegated Proof of Stake (DPoS) consensus, essentially a modified form of PoS, was a way to resolve the problem of power concentration within the hands of a few. Instead of only letting the highest coin holders be the validators on the network, DPoS allows smaller holders to participate indirectly, too. The notable examples of networks with DPoS include Cosmos (Atom), Tezos, and EOS.

The smaller coin holders of such networks can entrust (delegate) their coins to the so-called node providers, who actually maintain nodes, to represent them in consensus. For that, they receive a portion of the rewards that the node providers gain.

The coin holders can revoke their delegated coins at any moment and stake them with another node. This way, even with small holdings, a coin holder has the ability to re-balance the distribution of power in the system. Pretty neat!

DPoS has made it easy to engage in the consensus process. No mining equipment (as in PoW) or a huge position in coins (as in PoS) required.

Recently, many funds and prominent industry participants that have the trust of the community became validators for various DPoS networks. This means they took on roles of agents who run nodes for respective networks and enable their community to delegate coins to them. The rewards are then split among everyone involved.

Enabling the broad participation in the crypto economy is at the core of our mission at CEX.IO. Hence, providing a service that allows our users to take part in the consensus process for DPoS networks, is a natural path for us. And that brings us to staking at CEX.IO!

In the context of PoS and DPoS, staking refers to literally placing coins at stake in order to obtain the right to validate blocks on a network. Staked coins are usually locked for as long as a validator participates in consensus. These coins serve as a form of “skin in the game” to ensure a validator does not act maliciously (e.g. holds blocks and slows the network). If in PoS validators actually own the coins they stake, in DPoS a portion of the staked coins may be delegated to this validator by other holders, as we described above.

Participating in consensus (by providing computational power to create blocks, spending resources to maintain a node, and sometimes voting), validators are entitled to compensation in the form of coins emitted by the blockchain. The larger the stake of a validator, the higher the portion of total emissions that goes to that validator. In PoS, validators take all rewards, while in DPoS, validators distribute a portion of rewards, attributed to the coins that came from the delegation.

At CEX.IO, we’ve recently accelerated our process of adding new coins and tokens to our platform. Some of the already listed coins and those coming to the platform soon are “stake-able”. Tron (TRX) and Ontology, which are actively traded on CEX.IO, are good examples. As we are now supporting the DPoS- and PoS-based networks, enabling staking on CEX.IO is the next step.

The vision of staking with CEX.IO

Our goal is to bring staking to all users, regardless of their involvement in the technical side of blockchain technology. For that reason, we envision staking at CEX.IO in a unique and simple format. When staking launches, we’ll share the exact details, but for now, here are some basic principles of how we see it.

Staking under the hood

So how is it possible that coins can still be accessible at CEX.IO while accruing staking rewards when other node providers lock up the delegated coins?

Understanding this requires knowing how an exchange works under the hood. To ensure the safety and security of clients’ funds, the clients’ deposited coins are stored at the exchange’s cold wallet. They sit there, virtually untouched, except for the infrequent cases when the exchange’s hot wallet needs a “top-up”.

The hot wallet is what supports the users’ day-to-day activity on the exchange. Since it is highly unlikely that all traders withdraw all funds at the same time, the activity on the exchange is covered by a significantly smaller amount of digital assets than what’s been deposited in total. As a result, locking coins in the cold wallet for staking purposes does not interrupt trading activities! Since staking participation does not require a node provider to move coins elsewhere, these coins accumulate rewards for users while remaining in a secure cold wallet managed by CEX.IO.

Obviously, the vision above demands a precise algorithm that both calculates the rewards and manages the flows of coins between hot and cold wallets to maintain uninterrupted processes. We are in the final stages of testing this unique algorithm and developing a secure infrastructure to support it. Moreover, each DPoS coin has specifics that will translate into adjustments to this algorithm. We will maintain transparency about the activation of staking, rewards, payout process, and any other terms for each individual coin when the time comes. Be on the lookout!

A new way to participate in the crypto economy

We’re excited about taking our services to a new level and enabling you to engage in staking automatically. We cannot wait to see how this new initiative drives more value to our clients.

People often compare staking to receiving a passive income from an investment. The staking payouts do make this analogy valid. And the emission rates of some projects do make the return on investment from staking quite appealing. At the same time, there are big differences between staking and, for example, receiving interest from your savings account. The variability of the fiat-denominated value of staking payouts, the variability of payouts themselves, and the specifics of token economics for each project, are those differences.

And while there are a number of ways to participate in traditional finance, staking is surely an exciting way to take part in the emerging Decentralized Finance (DeFi) and in the crypto economy at large! To help our clients navigate in this new economy is both a privilege and an honor.

Stay tuned for the announcement of the specific timing when staking will go live!

In the meanwhile, let’s discuss staking on Telegram! Join the conversation here: https://t.me/CEX_IO 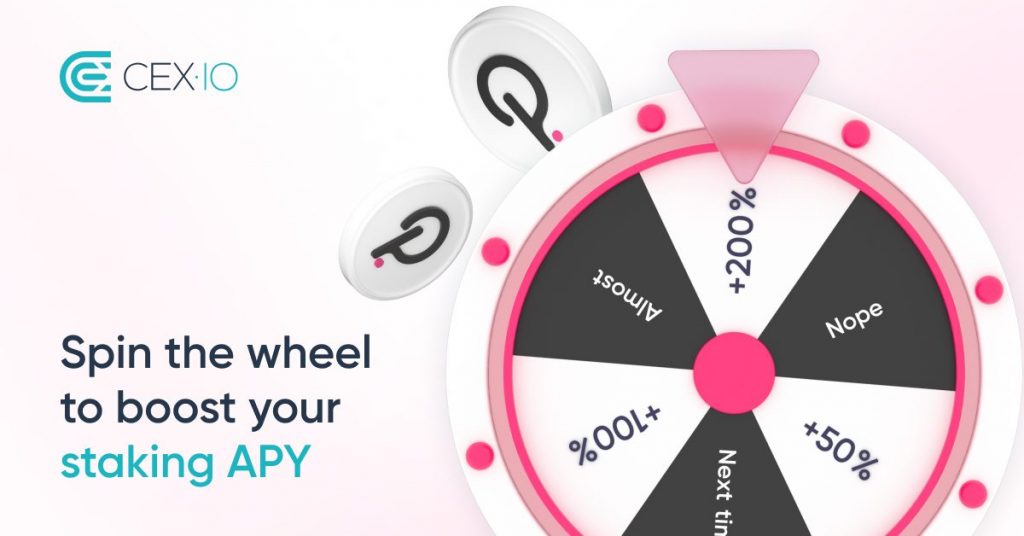 August was an active month both for CEX.IO and the cryptocurrency ecosystem. Discover new crypto assets and networks to complement your CEX.IO API trading, and read about critical industry news and updates.