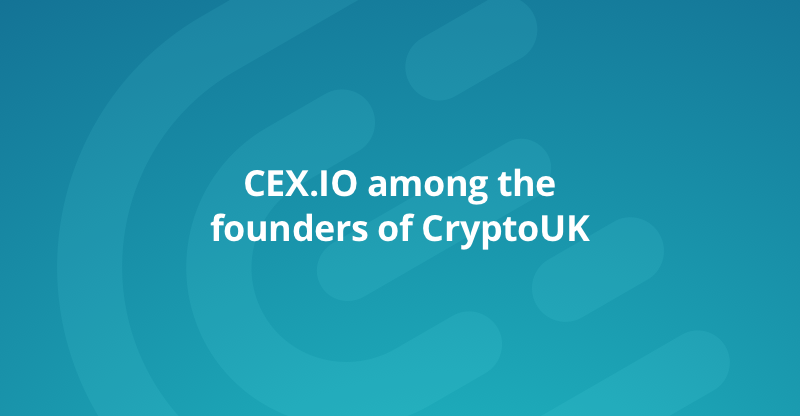 CEX.IO, among seven largest Bitcoin companies, formed a UK cryptocurrency trade body – CryptoUK. The union intends to establish the framework for self-regulation in the wild west of modern cryptocurrency environment that is currently worth £290 billion.

In this article, we would like to explain the position of CEX.IO on the founding of CryptoUK and how we think crypto community will benefit from association’s activities.

The Major Issue in Cryptocurrency Industry

The market of cryptocurrencies is a highly volatile sphere, and it attracts much attention from the wide community as well as the regulators. For example, Bitcoin is often facing rapid price increases and dropdowns. Among the population, every dramatic price increase is referred to as a hype, while every significant fall is said to be a bubble to burst. Depending on the market situation, regulators are either supporting or prohibiting cryptocurrencies.

In the described situation, the activities of regulators and the way the news are highlighted in the media tend to increase volatility, and trust towards cryptocurrencies decreases. It will be moreover the case with the involvement of unreliable ICOs created with the single aim of collecting the funds. In this light, the regulation has become a painful issue for crypto community.

As a cryptocurrency exchange with established self-regulation principles, we understand that the industry needs a stable framework for the activities of participants. At CEX.IO we see a solution in developing high standards for the whole crypto community. With this in mind, we have joined other large companies, including Coinbase, eToro, BlockEx, CoinShares, CommerceBlock, CryptoCompare, in an attempt to promote a new way for undertaking financial transactions.

All of the companies, including CEX.IO, are acting within the legal framework since their launch and strive to provide the services that meet the highest demands of users and regulators. The UK is always referred to as the leading country in FinTech industry. So, we believe that this union has a potential to become a major force in cryptocurrency sphere by creating a supportive environment and adding more value to the cryptocurrencies.

CryptoUK is the association founded by the major players to represent the interests of exchanges, trading platforms, intermediaries, and asset managers, among other stakeholders.

Market participants now consider appropriate regulations a primary tool for enhancing the experiences of all participants in this environment. In this situation, association members intend to draw attention of the Financial Conduct Authority to the topic of crypto.

Receiving relevant regulations from FCA would mean more efficient and qualitative working of crypto industry. It may also help to impact the traditional financial institutions to cooperate with cryptocurrency services rather than to block their activities. As one of CryptoUK founding members, we see it as an opportunity to explain how cryptocurrencies work, which should make them better accepted by traditional institutions.

Aiming to ensure the highest standards for the industry, the association developed a self-regulated Code of Conduct. The members intend to work together on updating the principles for the best practices in the sphere. All of the members take an obligation to act according to the promoted rules and ensure that the businesses, the customers, and community as a whole receive the highest benefits.

Association is primarily aimed at helping to educate politicians and regulators about the cryptocurrency industry. The members are also interested in cooperating with authorities, such as FCA in the UK, to develop an appropriate operating framework for crypto businesses. The created in such a way regulations are expected to form the first part of broader UK rules around volatile cryptocurrency trading.