What is Algorand (ALGO)?

At its core, Algorand uses a consensus mechanism called pure proof of stake (PPoS) to secure the network and achieve decentralization. Unlike other proof of stake networks, PPoS does not put validator or user funds at risk of slashing (a loss of a certain amount of staked funds in the case of misbehavior). To become a validator and contribute to the network, nodes have to stake only one ALGO. Using such an approach, Algorand could be considered more democratic compared to its competitors, as everyone can secure the network as a node instead of delegating tokens to validators with larger stakes.

The Algorand network has a native token called ALGO that serves as the means of payment within the network and can be used for staking.

A brief history of Algorand

The Algorand company was founded by Silvio Micali, an MIT professor, and a Turing award winner, in 2017. In 2018, Algorand experienced two private funding rounds raising $4 million and $62 million respectively that helped developers to launch the testnet of its blockchain in April 2019.

In June 2019, Algorand completed its first public token sale (Dutch auction), raising $60,4 million for selling 25 million ALGO. The end of the sale coincided with Algorand’s mainnet release, which created 10 billion ALGO tokens at the genesis block. A week before the mainnet launch, the team behind the Algorand development open-sourced the code for its protocol.

In November 2019, Algorand experienced a major v.2.0.0 upgrade that introduced Algorand smart contracts, Algorand standard assets (ASA), and atomic assets. In August 2020, Algorand introduced a rekeying feature that allowed users to change their private spending key (the key users use to spend stake) without the need to change their public address.

In 2021, the Algorand team, among other things, worked on improved transactions throughout. In March 2022, Algorand expanded smart contract functionality by allowing decentralized applications to interact with each other using contact-to-contract calls.

How does Algorand work?

Algorand’s PPoS consensus mechanism is considered a key to its scalability. The system chooses validators and blocks proposers randomly from anyone who staked ALGO and generated a participation key. The chance of being selected is related to the proportion of the participant’s stake of the overall amount staked. However, even users with relatively small stakes can be selected as validators because there is a low barrier to entry for the average user.

In general, the block production in the Algorand network may be divided into three steps:

Considering the average block time of 4-5 seconds, recovery mode may not significantly affect the blockchain throughput. If someone proposes “bad blocks”, their stake will not be slashed, because cheating the system would devalue their holdings. However, this opens a way for potential spam attacks.

After selecting a valid block, each node receives a certificate for the block and adds it to the ledger. After that, a new round of selecting block proposers and voting committees takes place. As only one block proposal reaches the certification stage, the chance of creating a fork is extremely rare in the Algorand blockchain. Once a block is added, all transactions included are treated as final.

Another major architectural pillar of the Algorand network is using two types of nodes — relay and participation ones.

Relay nodes are always configured to store the data about the entire Algorand blockchain operations. In order to make storing requirements more efficient, users may use Algorand’s Vault which represents blockchain compression technology.

Algorand features an on-chain governance model to accept or deny protocol update proposals. Algorand users may post code changes on the network and ALGO stakers may use the PPoS consensus mechanism to vote on upgrades. Stakers may also agree on additional parameters related to a given upgrade. For example, after accepting proposals, users may have another round of voting to collectively determine which block the update to implement.

Once a protocol upgrade has been released, at least 90% of network participants must approve the change (by simply updating their nodes) before proposal implementation. When a protocol upgrade is approved, the remaining network nodes have a period of 140,000 blocks (around seven days) to complete the upgrade. Otherwise, these nodes will be “kicked off” the network because they will not be able to synchronize with other nodes.

For deploying smart contracts, Algorand uses its own virtual machine, empowering developers to write smart contracts in either Python or Reach programming languages. Smart contracts contain logic that once deployed can be remotely called from any node on the Algorand blockchain.

Algorand standard assets, also known as ASA, imply a mechanism to represent any type of asset on the Algorand blockchain, including fungible, non-fungible, restricted fungible, and restricted non-fungible assets. ASA issuers and managers may control different roles for their assets and users to comply with their business and compliance requirements. For example, ASA issuers may whitelist/blacklist addresses where ASA can be transferred, force ASA transfer to comply with regulatory requirements, and create asset reserve models.

The Algorand ecosystem is currently dominated by non-fungible assets that contain 99% of all ASAs created in the network.

Atomic transfers simultaneously transfer multiple assets among multiple parties. Specifically, after grouping transactions together, either all transactions are executed or none of them. Atomic transfers are considered to be used in debt settlement, match funding, decentralized exchanges (DEXs), and other types of complex multi-asset/party transactions.

The Algorand blockchain has a native cryptocurrency called ALGO to incentivize users to secure the network and power transactions or protocol changes. As a result, ALGO has three primary use cases:

There is no lock-up period in the Algorand network, so users can move their ALGO tokens anytime while participating in staking. Staking is automatically handled by smart contracts.

In addition, ALGO tokens can be used as a means of payment within the Algorand ecosystem, and projects that adopted Algorand technology.

The total max supply of ALGO tokens is 10 billion, which will be emitted until 2030, according to the current tokenomics plan. Given Algorand’s fixed supply, it means the liquid supply will inflate with consecutive unlocking and distribution of pre-mined tokens.

Initially, ALGO distribution was based mainly on a number of different ecosystem programs, such as universities and grants, and algorithmic rewards to the community, early backers, and network service providers. In addition, 2,5 billion tokens combined were allocated to Algorand Inc. and Algorand Foundation to support the further development of the Algorand blockchain.

In September 2019, relay nodes voted in favor of delaying their ALGO payout since the supply growth at that time was “too large relative to the state of adoption”. Algorand team and community create a new vesting schedule with a feature of slowing down and accelerating vesting based on market conditions.

In March 2022, Algorand Foundation updated the information about the further allocation of unlocked tokens, taking into account the circulating supply at that time.

It is considered that community and governance rewards, which implies staking/earning ALGO, will decrease over time, and the difficulty of attaining them will increase. At the same time, this marks that after distributing most community/governance rewards and total supply, Algorand will be more focused on investing in the growth of the ecosystem by providing special support programs. 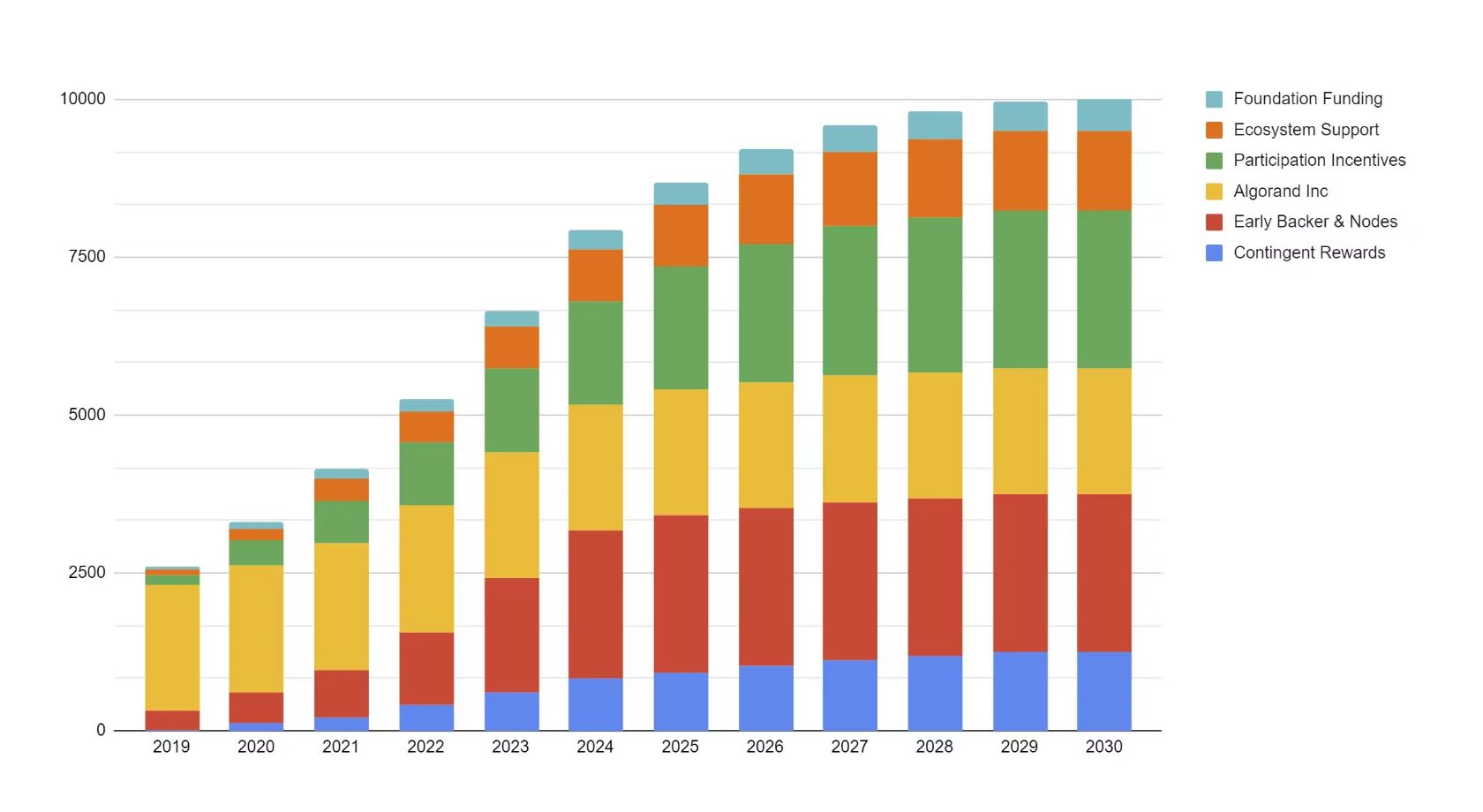 Algorand has gathered several popular services in its ecosystem such as DEXs, NFTs, stablecoins, and lending protocols but they are currently considered at the early stages of development. It means that these services may not show outstanding performance compared to other smart contract platforms such as Solana, Avalanche, or Ethereum. At the moment of writing, the total value locked (TVL) in Algorand DeFi services is over $200 million.

Stablecoins are commonly viewed as a key factor for the development of DeFi within the ecosystem. At the moment, the Algorand is mainly supported by USDC and USDT with the circulating supply of 238 and 165 million tokens respectively.

USDC is considered the primary stablecoin on Algorand, which is mainly used in various DeFi services. Pools with USDC have one of the highest total value locked within the ecosystem. But the USDC supply on Algorand is gradually decreasing, while the opposite happened with USDT.

In addition to USDC and USDT, there are some other stablecoins available in the ecosystem such as ARCC and QCAD but they are less adopted within the network. Currently, there are also no major stablecoin-issuing protocols like MakerDAO on Algorand.

There are two major native lending protocols available on Algorand: AlgoFi and Folks Finance. AlgoFi is the first and the biggest lending project on Algorand that dominates the ecosystem’s TVL. At the moment, AlgoFi’s dominance is 44% but it is gradually going down because of the development of other projects. For comparison, at the beginning of 2022, AlgoFi’s dominance exceeded 80%. Folks Finance is second in terms of TVL on Algorand.

At the moment, there are only a few DEXs on Algorand, including Tinyman, Pact, HumbleDefi, and Algodex. Tinyman is a native AMM DEX on Algorand with the highest TVL. Tinyman is one of the projects receiving support from the Algorand Foundation via ecosystem support programs. Pact and HumbleDefi are AMM DEXs launched in 2022, which recently started their adoption. Algodex is an order book DEX, which is currently on testnet. 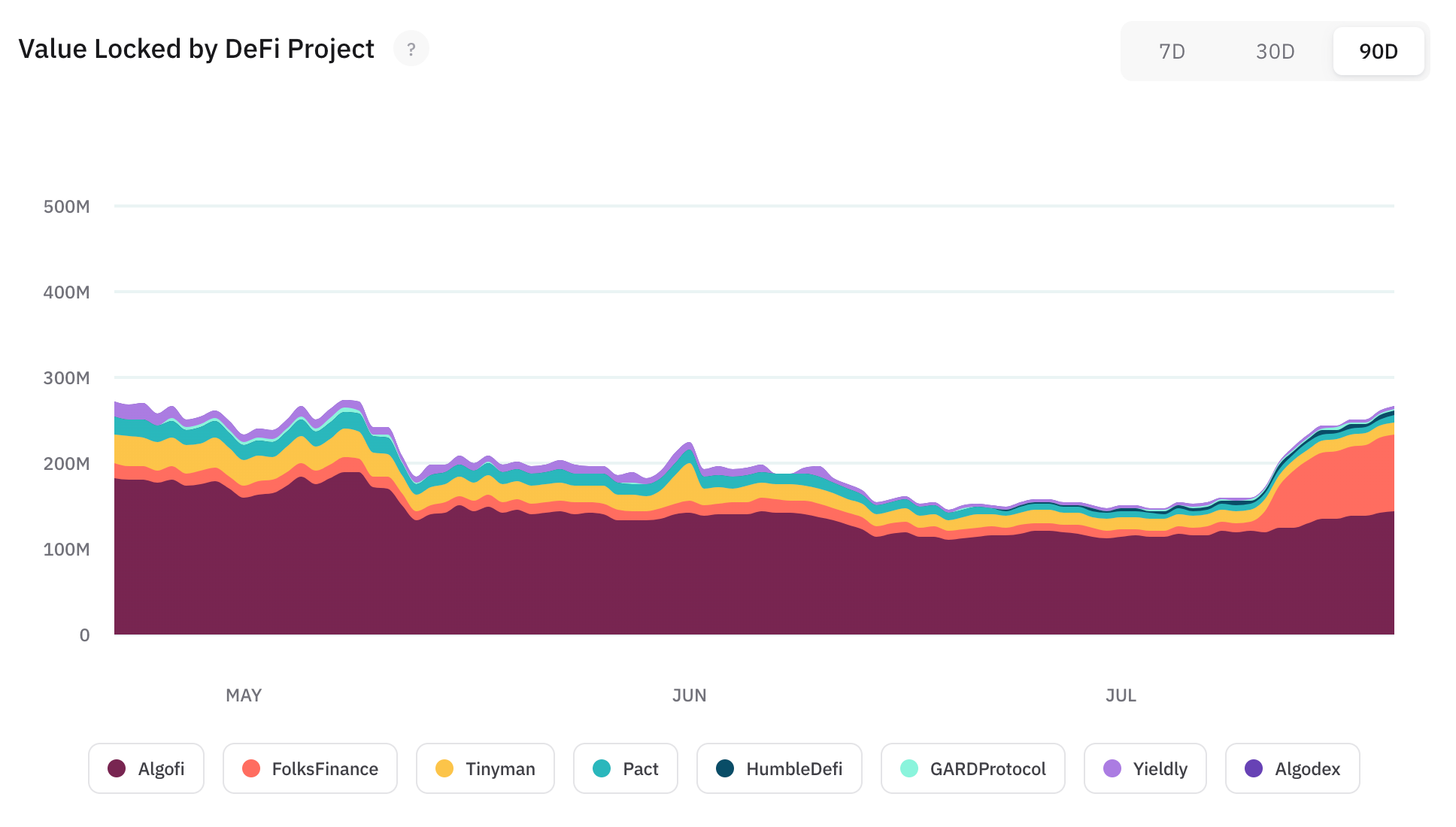 In order to offer oracle services within the ecosystem, Algorand cooperated with Razor Network, bringing on-chain and off-chain data for further development of DeFi. Algorand also has several bridges to offer interoperability and connect the main network with others. They include Yieldy Finance, offering a DeFi suite with cross-chain swapping, and Swingby which received a grant for bringing Skybridge to Algorand. Skybridge is a cross-chain bridge for Bitcoin and Ethereum but it hasn’t been launched on Algorand yet.

In addition, Algorand blockchain architecture has attracted interest from the corporate and government sector, including:

Find out more about Algorand

Algorand aims to resolve the famous blockchain trilemma (decentralization, scalability, security), where developers can be forced to ultimately sacrifice one aspect as a trade-off to accommodate the other two. As a potential answer to this trilemma, Algorand offers its pure proof of stake consensus algorithm where users have relatively low requirements to become a node and secure the network. Although there is some compromise on development centralization, Algorand developers continue to work on adding new features and improving the core chain to achieve decentralization without sacrificing transactions throughput and network security.

Algorand can be recognized as a “project with tech” but its community sometimes claims the project lacks marketing and showcasing of its features. Besides, Algorand has an ecosystem in the early stages of development with many products launched in 2022 or maintained on the testnet.

Algorand creates incentives for developers to expand the ecosystem with new products and support existing ones. Since it is still in an early stage, it may take some time before the Algorand ecosystem sees a significant boost in adoption.

CEX.IO customers can buy ALGO in order to join the Algorand ecosystem and use the features the Algorand blockchain provides. In addition, users may trade ALGO to take advantage of its price and the potential ALGO adoption.

Check out our latest CEX.IO Spotlight, and learn how JASMY is pioneering data sovereignty in the age of Web3.0.

The growing demand for DeFi products helps Kava stand out with its technology and use case. To help you learn more about the Kava protocol, we bring you this spotlight article!