Songbird is a Canary blockchain network for the Flare ecosystem. It forms a testing foundation for the upcoming Flare dApps and smart contracts. Testing on the Songbird ensures that only projects that are well prepared and fully operational can be onboarded on the Flare ecosystem. This is how the company protects itself from the risk of running weak projects and ensures that the network gets more exposure and adoption.

Since Songbird is the testing ground for possible Flare updates, the Songbird network will probably be a more progressive network than the Flare. Before being rolled out the Flare network, all innovative ideas and dApps will be tested on Songbird. This is why Songbird will be able to host projects of lower value than the Flare, but also use the same core Flare protocols.

Core use cases of Songbird

Additionally, the network will serve as a trial floor and developing laboratory of the community that will build applications that will later be onboarded on Flare. Having passed testing on Songbird, most of the applications will most likely be moved to Flare, particularly those that employ the FTSO and F-Asset systems.

Songbird also serves as a procedure for FLR token holders to get acquainted with the most critical Flare protocols, for example, delegation to the FTSO and running applications that build on Flare, yet without risking their FLR coins.

Flare also launched a DEX called FLareX on the Songbird Network. Users can trade, hodl, and invest in cryptocurrencies in a decentralized way without an intermediary and have complete control over their assets.

The issues that Songbird (SGB) fixes

Serving as a testing ground for Flare, the Songbird network aims to fix several issues. As problems are discovered during the testing phase and removed, this serves as a great way to boost the security, stability, and usability of both Songbird and later Flare, if the tested dApps are launched on Flare. As a result, the Flare ecosystem becomes trustless. A byproduct of this is a large community of testers that assist developers in making their products better.

Songbird enables the blockchains that came before smart contracts existed to become interoperable. For example, blockchains such as bitcoin or ripple could not operate smart contracts. Many earlier networks still can’t use smart contracts. Songbird solves this issue and helps developers who build on those networks by providing them with essential services as it operates as a second-layer protocol. As a result, functionality and scalability are improved, bringing down blockchain congestion.

At the end of March of 2022, the Flare ecosystem introduced a State connector, an innovative technical solution meant to tackle universal interoperability, which was one of the most disappointing issues in the global blockchain community. It has the following features: 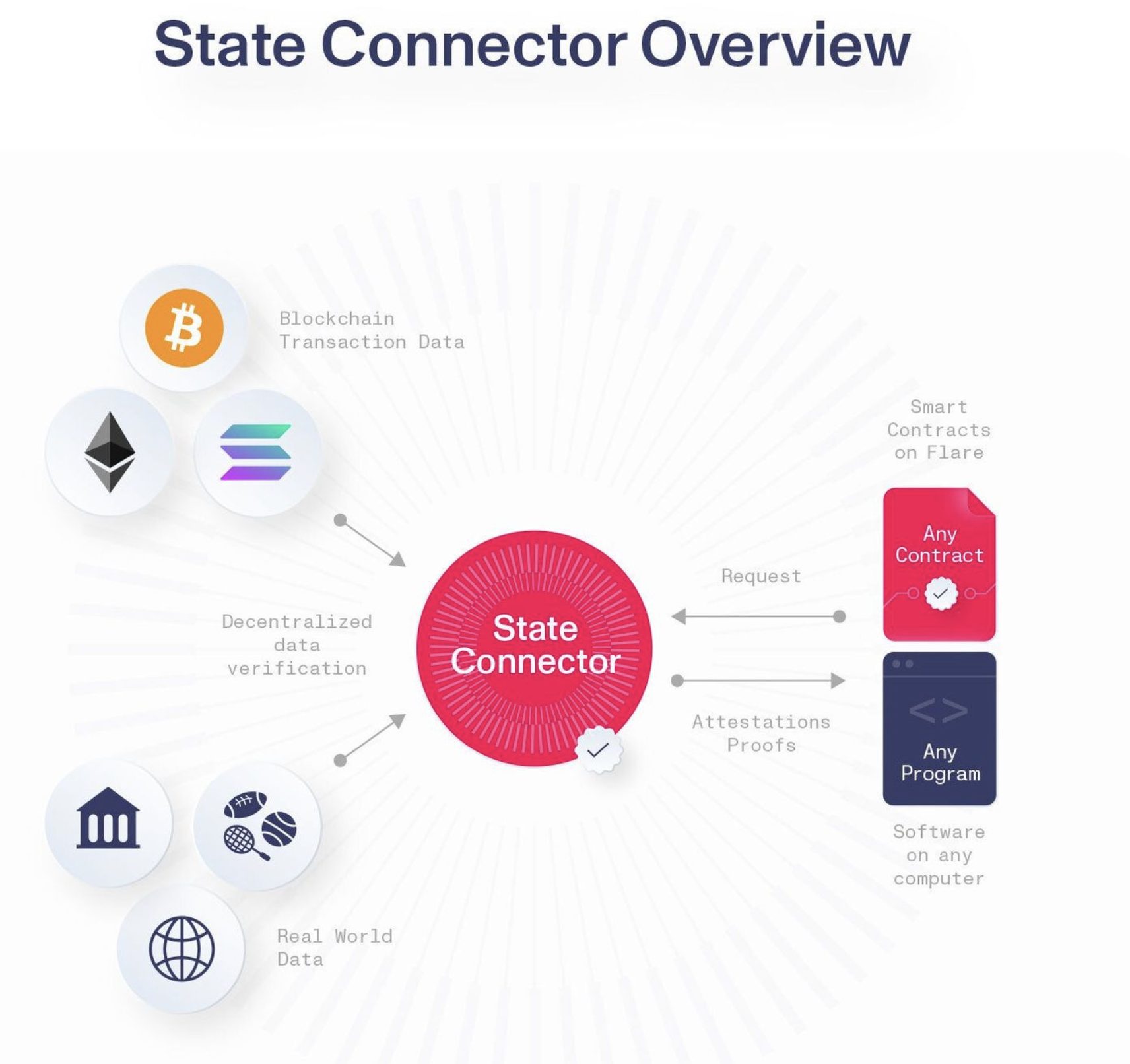 Songbird reduces the chance that users can lose their FLR tokens. This is possible because these tokens are not used for protocol testing. This role is passed on to SGB tokens. As a result, those that hold FLR tokens can take their time to get acquainted with the Flare protocols and try all of them in the process.

SGB is the Songbird native token for utility and testing. The total starting supply is 15 billion with a preset starting inflation rate of 10% per year and is implemented utilizing the FTSO and validator reward networks. SGB was airdropped to eligible holders of Ripple’s XRP and users who held XRP at the time of the airdrop got 0.1511 SGB per 1 XRP they held.

There is no preset minting rewards pool, but the Flare foundation will control the supply of the rewards. The airdrop was the only phase in the distribution of the SGB token.

SGB token fulfills the function of governance too. Owners of Songbird have a unique governance structure under their control. They cannot control Songbird directly as it is under the subordination of the Flare ecosystem. Therefore, the governance of Songbird is indirect as token holders can vote on the addition of more chains, prices of F-Assets, and a wide variety of new features.

Even though the Songbird network does not rely on mining and staking, you can still stake Songbird (SGB) and earn monthly returns on CEX.IO. You don’t need to do any complicated work such as running a node, keeping your staking software online or updating it constantly.

Similarly, you will not have to delegate your SGB coins to others who run a node. You can stake SGB stress-free right on the CEX.IO platform. Let’s see how you can do that.

You can easily purchase SGB on the CEX.IO Spot trading page by buying SGB with USD. The moment you purchase the coin, it is added to your wallet and automatically staked. You don’t need to do anything else. To buy SGB, go to the Spot trading page, fill in the SGB symbol and click on the SGB/USD button that will appear. A new window will open up asking you how much USD you want to spend to buy SGB. Choose any number you wish, as the minimum number of SGB for staking is just one SGB.

After you make your purchase, your SGB is automatically staked and you can expect your rewards to arrive every month. Currently, the APY (Annual Percentage Rate) for SGB is 8%-9%. However, keep in mind this is not a simple interest rate but a compound interest rate. This means that you earn interest not only on your principal amount, but also on your accumulated interest.

This means you will earn more than you would if it were a simple interest rate used by savings accounts. To see all APY rates for all stake-able coins or tokens on CEX.IO, visit the Earn page. 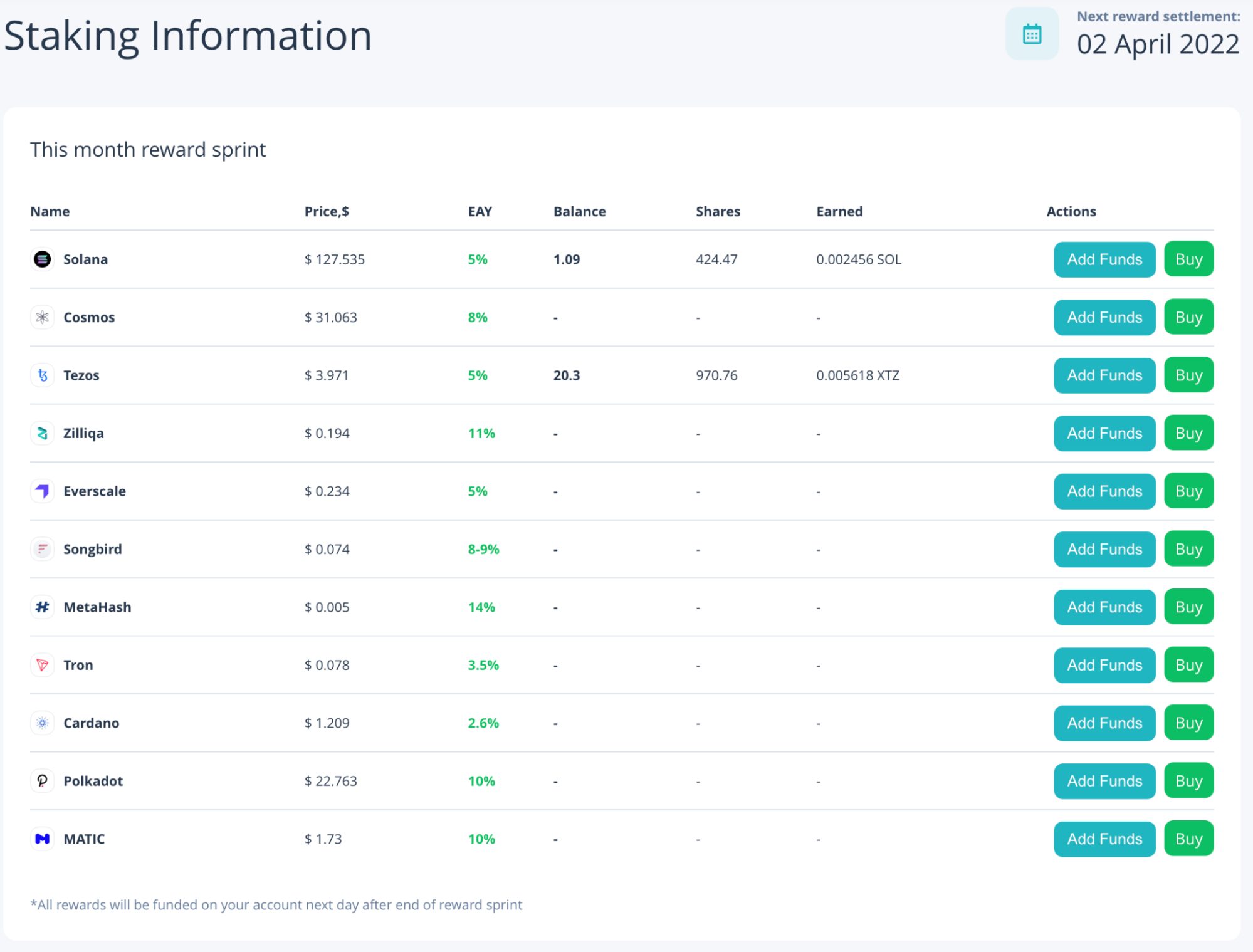 Sources to learn more about Songbird

The Flare Network opened up space for the creation and deployment of decentralized applications. With this technology, other blockchains will be able to build and create smart contracts. As smart contracts are one of Ethereum’s fundamental driving forces, the Songbird and Flare ecosystem can become a rival of Ethereum and possibly outrank it in the long run. Songbird’s solutions would enable Ripple (XRP), Litecoin (LTC), or Dogecoin (DOGE) to develop smart contracts. This would be a major threat to the dominance of Ethereum and a game-changer in the entire blockchain industry.

Staking Songbird (SGB) is a great way to earn passive income on CEX.IO.