JASMY is a blockchain protocol built on the Ethereum network dedicated to expanding data democratization in the Internet of Things (IoT). By combining advanced encryption, distributed data storage, and blockchain technology, JASMY is facilitating new connections between human-derived information and emerging Web3.0 environments. The JASMY ecosystem uses an ER-20 governance and utility token, JasmyCoin, for both network and dApp functions.

In an era where most user data is controlled by four major tech companies, JASMY seeks to revert that power dynamic back in the user’s favor. While concepts of the metaverse are still in their nascent stages, JASMY is attempting to block some of surveillance capitalism’s more pernicious qualities from taking root in the next wave of online expression. Part firewall, part digital storage unit, JASMY is pioneering data sovereignty for those invested in owning their own data.

Core use cases of JASMY

In some ways ahead of its time, JASMY is intended to work in tandem with real-world and metaverse environments to capture and preserve user data. By combining data from smart devices and other IoT infrastructure with decisions made online, on-chain, and in the metaverse, JASMY offers users a complete profile of their own data to use at their own discretion.

Personal data collected in the JASMY ecosystem is stored in “digital lockers” accessible only to the user. Referred to in their white paper as a “Decentralized Data Democracy,” the entirety of the JASMY ecosystem is a safe haven for users to recognize the value of their own data. In the spirit of generating new visions and innovations for the future, JASMY empowers individuals to wrest control from Big Data and assert a stronger presence in the growing Web3.0 environment.

The Issues that JASMY fixes

With the rise of Big Data, four major tech companies have metastasized to control the bulk of online activity. Google, Facebook, Amazon, and Apple enjoy immense profit margins by leveraging unmitigated access to user data. Whether it’s sensitive biometrics from a smartphone or watch, consumer preferences, or data exhaust from location services, all of it can and will be monetized, often without user consent.

Additionally, network infrastructure itself has made these caches of user data vulnerable to leaks and hacks. When systems rely on monopolized, centralized locations, sensitive data like username/password combinations and other identifying information is made vulnerable to bad actors. Not only is personal data being siphoned off and used for profit without user consent, it’s also warehoused improperly, putting users at greater risk.

How does JASMY work?

That’s why JASMY is seeking to return data sovereignty to the people. With the metaverse arms race in full effect, JASMY is carving out a safe space for users to generate data across an array of smart devices, online services, and dApps without losing their autonomy. In turn, users can select how, when, and what to share with third parties or peer-to-peer across the network. JASMY achieves these functions by deploying Secure Knowledge Communicator (SKC) and Smart Guardian (SG) technology.

SKC is the network’s core service as it enables key features of the JASMY ecosystem. In order to transition from an enterprise-dominated arrangement to a customer-oriented posture, JASMY opts to give users complete control of the information they share with the network. Staying true to their aversion to centralized systems, JASMY stores all user data, including identifying KYC information in each user’s digital locker. That way, from the moment users begin interacting in the JASMY ecosystem, they immediately start retaining control of their own information. Users receive unique codes to access their information and have the power to regulate where and when their information is shared. From here, SKC spirals outward to dovetail with another critical piece of network infrastructure: Smart Guardian.

Where SKC works to protect and index user information, SG facilitates secure connections between user data and devices associated with that user. Once SKC runs Know Your Machine, or KYM, an authentication program, user data is seamlessly transferred from across smart devices and stored in their digital locker. This helps ensure smart devices, appliances, vehicles, homes, or any other node in the IoT can establish a secure connection with the network should the user seek to permit access. 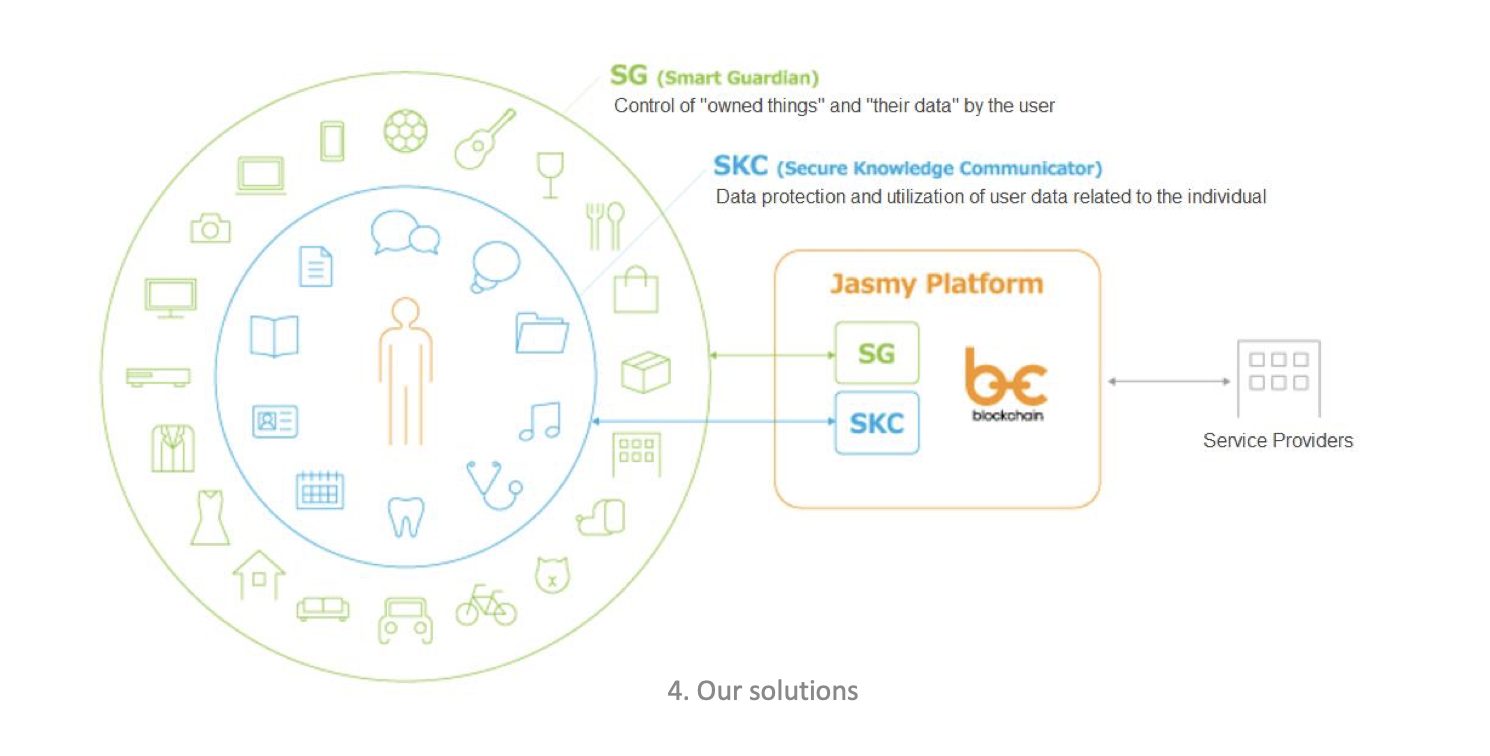 The JASMY ecosystem arrived at these novel solutions through the combined use of edge computing and distributed network storage. Where edge computing refers to storing data closer to the source of its creation, a distributed network further bolsters this arrangement by allowing those edge nodes to contribute to the health and security of the blockchain. JASMY circumvents the issue of replicating all stored data in each subsequent block by siloing user data in digital lockers (read here as edge nodes) while only managing hash values on the network. In essence, the JASMY blockchain works to provide addresses for the data it connects, rather than senseless iterations of all data required to store it on-chain. Together, edge computing and distributed networks allow SKC and SG to become realities for a growing cadre of JASMY users.

As outlined in the JASMY whitepaper, all of these technologies work together to allow the JASMY ecosystem to function, “as a place to create value for the data generated.” By encouraging users to understand the value of the data they themselves create, JASMY hopes to reorient consumer-corporate relationships by enabling individuals to only sell their data if they choose to do so. In this scenario, choice data could be shared at the user’s discretion through smart contracts designed to maintain a balance of power between the two entities. Up until this point, corporate dominance over user data is standard practice. But by awakening customers to the power their data wields in influencing the development of future products and services, JASMY hopes to realign this imbalance towards the betterment of a common good. 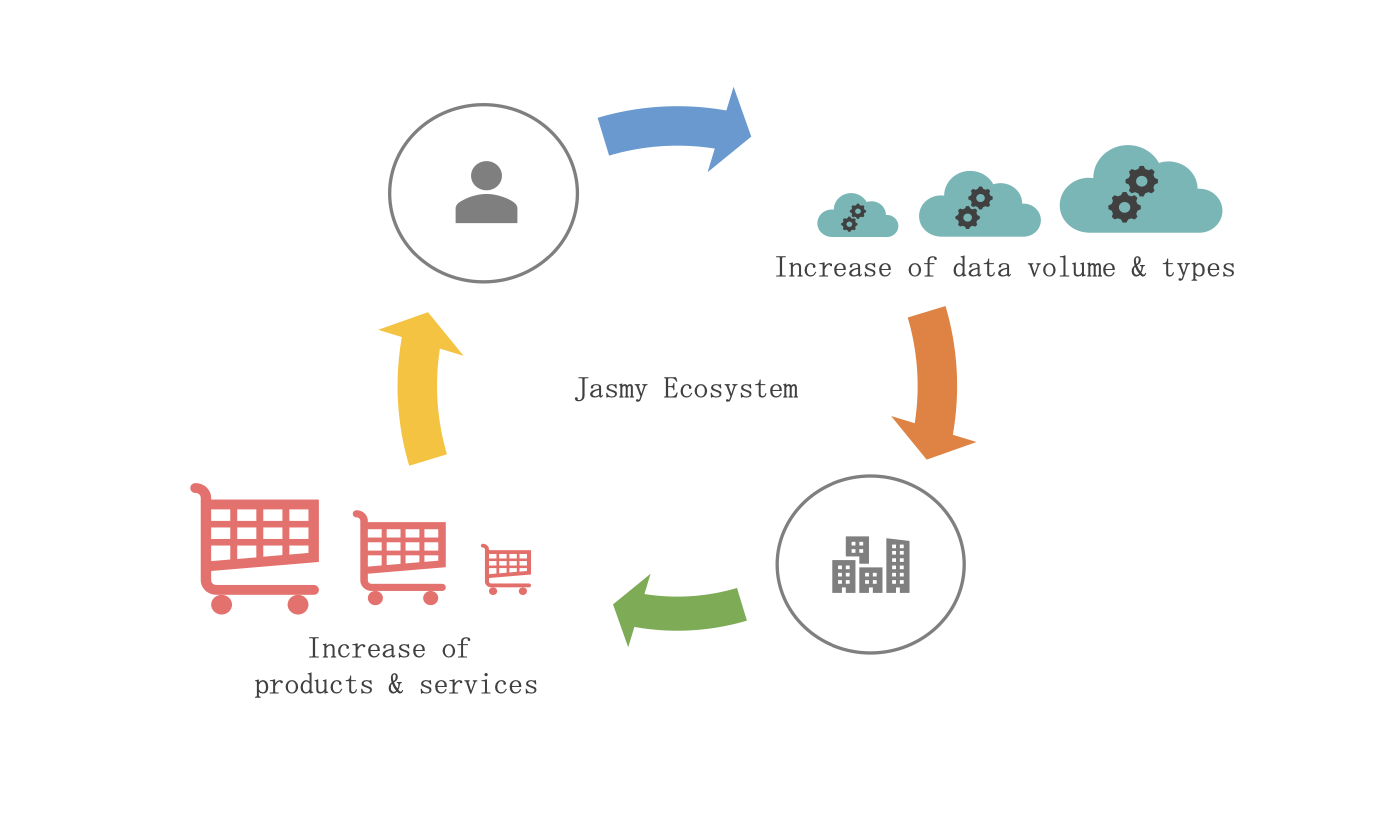 JasmyCoin is the custom cryptocurrency for the JASMY ecosystem. Built on the Ethereum blockchain, this ERC-20 token enjoys the full security and processing power of the Ethereum network. JasmyCoin can be used to complete transactions on-chain or within dApps hosted in the ecosystem. However, because many of the amenities and services JASMY seeks to offer are still largely in development, the relative potential of JasmyCoin is very much an open-ended question.

Since Bitcoin’s debut, many crypto skeptics have written off the industry as solutions seeking problems. However, JASMY addresses the current problem of data inequity, while anticipating this problem worsening should the promises of Web3.0 come to fruition. This creates an interesting liminal space for JASMY, where they’re essentially a catcher’s mitt waiting for a fully-fledged metaverse to cross the strike zone. The questions of when and to what extent these sapling digital spaces will prosper are still up to debate. Yet, should technology and information develop in the way some have predicted, JASMY is a road-ready solution to creating a more inclusive and harmonious digital data economy.

Part of clearing this hurdle surrounds the question of wide-scale adoption. As more people parse the meaning and discover the freedom of data sovereignty, JASMY hopes that the desire to own one’s data will quickly become endemic in the next phase of online communities. To speed up this process, JASMY is hoping to educate its users to start identifying as individual data providers instead of just customers or consumers. That way, each user possessing a unique digital locker can elect to enter into agreements with corporations as equals approaching a mutually respected arrangement. While simple in theory, if realized, this could be the most radical power shift ever observed in corporate/consumer relations. Much like a strong union, if enough users demand sovereignty over their own data, corporations will be forced to come to the table prepared to pay for the data they’ve been quietly monetizing, often at their customers’ expense, for years.

JASMY was developed by a team of former Sony executives who, together, brought decades of tech and consumer electronics experience to the project. Having worked closely with many of the products and systems that JASMY hopes to improve, the management team is aptly positioned to deliver solutions that reflect the tech spaces they themselves helped pioneer. President & CEO Kazumasa Sato held a series of top-level positions in the marketing and creative arms at Sony, before joining the JASMY board in April of 2016. Since taking the position of CEO in 2018, Sato has been focusing his expertise on scaling JASMY to become a global leader in data democratization, and ushering in a new era of information exchange between individual data providers and the global market.

Learn more about JASMY by reading their white paper.

Determining which crypto to pick from a pool of assets can be quite overwhelming. Luckily, Harvest Finance is here to help you. Learn more in our blog post!

We’ve released a new Spotlight! Check out what Polygon has to offer and what makes the Polygon platform and its native token MATIC so special

Did you know that Tron hosts almost half of all Tether (USDT) tokens? Find out more about these and other Tron ecosystem features in our spotlight!