The Bitcoin-powered blockchain network opened up an era of the decentralized world with a dozen benefits associated with it: anonymity, trust, improved security, reduced costs for transactions, speed, and immutability. Since then, the blockchain universe has developed by leaps and bounds over a short period of time, with new blockchain networks being born regularly. Each of those contributed something unique to the decentralized universe and thus fostered the popularity of the ecosystem by attracting new industries every year.

The Spotlight series aims to introduce you to the most aspiring blockchain networks, and this piece will bring in a rapidly evolving network of Cosmos, which is often referred to as the “internet of blockchains.” Let’s find out why the project is unique and how it differs from other networks.

Cosmos embodies the creators’ vision of a decentralized network ecosystem. Although the networks are part of the same ecosystem, they are independent and interoperable, enabling them to swap information and tokens among themselves without any centralized interference.

Cosmos seeks to solve the common problems of current blockchains that include scalability, usability, and governance. The network supplies developers with tools to create independent blockchains that could be applied for various use cases, empowering them to interact frictionlessly among themselves within the network.

The independent blockchains are called “zones”. They are connected to the Cosmos Hub’s leading blockchain, the first blockchain within the ecosystem. The Hub tracks the condition of each zone and keeps a record of them. The zones perform the same function for the hub. The Cosmos Hub uses a Proof of stake (PoS) consensus mechanism.

According to Cosmos, the interoperability that its predecessors lack will enable Cosmos users to trade tokens native to one blockchain like Solana for tokens on another blockchain like Ethereum.

A brief history of the Cosmos network

Jae Kwon and Ethan Buchman were the Cosmos network creators, which started with the Tendermint consensus algorithm in 2014. The Interchain Foundation (ICF), a Swiss non-profit that funds open-source blockchain initiatives, assisted the co-founders in the mission.

In 2017, the Interchain Foundation staged a two-week ATOM token initial coin offering (ICO), raising more than $17 million. Tendermint Inc. collected around $10 million in a Series A investment round in 2019, which helped them resume and speed up the development of the product.

There are three layers that make up the Cosmos network:

For the entire web of chains and layers to work together, these three layers must be interconnected to one another. A few open-source tools help this to become a reality, and they are constantly evolving in response to user feedback. Below are the main tools that help the network function unhindered.

Tendermint BFT is a state of the art algorithm used to protect the network, validate transactions, and commit blocks to the blockchain by a network of computers running the Cosmos software. It communicates with applications and interconnects them through the Application Blockchain Interface protocol.

Tendermint Core is the heart of Tendermint, a PoS governance mechanism that enables Cosmos Hub’s distributed network of computers to function concertedly.

The mechanism controls the immense web of transaction validators (or nodes). When some change or an upgrade is introduced to the system, the nodes must consent to a vote. For the changes to occur, validators need to stake the native coin ATOM. The more ATOM staked by a validator, the greater their voting power.

Every zone in the ecosystem is connected to the Cosmos Hub through IBC.

The IBC ensures that data is transferred effortlessly, safely and fast among all interconnected zones. When a zone is connected to the central Hub through the IBC, it becomes interoperable with all the remaining zones. It means that all the blockchains within the system that operate immensely different applications, validations and consensus can swap data seamlessly.

All developers can take advantage of the Cosmos software development kit to build their own blockchains with the help of the Tendermint consensus algorithm.

The tools in the kit ensure that the main functions of the ecosystem, such as minting, staking, governance, and distribution of ATOM are available for the developers. This enables coders to make necessary changes and additions to their networks. The implementation of Cosmos SDK encourages developer customization.

By interconnecting independent blockchains within the ecosystem, Cosmos aims to become the largest blockchain by adopting active blockchains. Cosmos’ evolution to Blockchain 3.0 solves the problems inherent in Bitcoin and Ethereum. By developing ways around bottlenecks like limitations in scalability, usability, and sovereignty,  Cosmos has cultivated many fruitful partnerships in the Cosmos network.

A real breakthrough occurred when Binance Chain embraced Cosmos’ technology. Currently, there are 49 projects onboard. Below are some notable partners of the Cosmos network. You can find the complete list here.

ATOM is the native token of Cosmos Hub, and it is used for transaction fees, staking, and as a voting mechanism in governance. At the time of writing, ATOM ranked as the 25th top cryptocurrency with a market cap of $9,1 billion, according to Coinmarketcap. The price of ATOM reached an all-time high of $44.30 on September 19, 2021. Between January 11, 2021 to January 11, 2022, the token’s value rose over 661%.

The supply and issuance of ATOM tokens are limitless, and they are created by the validators and chosen progressively by the organization following the rules of the governance of the protocol. Right now, block rewards are fixed at 7%-20% of the annual inflation from the total ATOM supply. The blocks are generated in five-six seconds, which makes it one of the quickest blockchain networks in the blockchain universe.

There were multiple private investment rounds for the Cosmos project, and a public fundraiser event finished on April 6, 2017. The Interchain foundation that organized the fundraising grouped the recipients of ATOMs into four separate blocks: Private Contributors, Public Contributors, All in Bits Inc (AiB), and the Interchain Foundation (ICF). 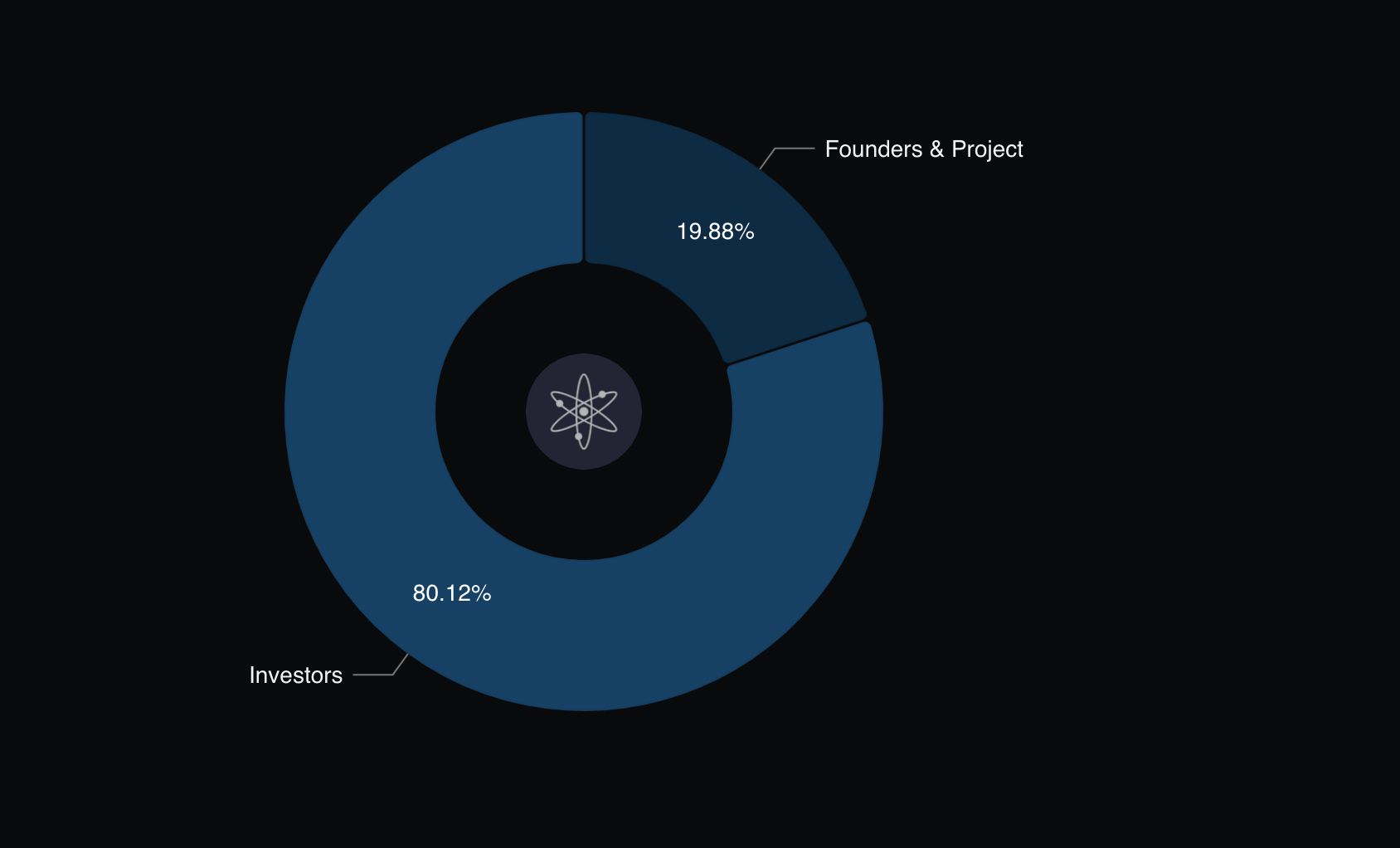 Find out more about Cosmos

Cosmos has established itself as a competitor to Ethereum. Since Cosmos allows for the creation of multiple blockchains within the ecosystem, there can be thousands or even millions of them in the foreseeable future if the project keeps progressing at its current speed and scale.

While the Cosmos ecosystem has many advantages, there are problem areas that need to be addressed. Work on by solving the issues such as the staking results in ATOM being frozen, while validators carry out their duties and staked ATOM is locked for a minimum of three weeks. Examples include the delay or failure to deliver ATOM staking rewards.

On CEX.IO, you can find multiple options to earn with ATOM. You can buy, trade, and stake ATOM without a lock period, so you can withdraw or add more funds at your own pace.