Cardano is an industrious platform with grand ambitions and a respected developer team at its core. While many other blockchain projects occupy one main focus, Cardano reaches into numerous sectors of the crypto space. The platform has the capabilities to provide smart contracts, decentralized application (dApp) development, payments, and much more.

Currently, they have the claim of being the largest proof of stake (PoS) cryptocurrency. Cardano’s continuous development is managed by three entities, IOHK, the Cardano Foundation, and EMURGO.

Cardano’s inception can be traced back to the initial development of Ethereum. The polarizing figure Charles Hoskinson, among several other developers, began building Ethereum in 2014. While Hoskinson was instrumental in creating many of the foundational elements of Ethereum, he eventually found himself at odds with the rest of the team regarding the direction of the project.

In 2015, Hoskinson left Ethereum. He later teamed up with Jeremy Wood and together they created the blockchain development company IOHK, and eventually Cardano. Hoskinson envisioned a platform that would improve upon Bitcoin and Ethereum by adding more functionality, as well as employing a completely sustainable and open-source blockchain.

Development on Cardano began in 2015 and the token was launched in 2017 after raising over $62 million in their Initial Coin Offering (ICO) which was completed on December 31, 2016. Interestingly, Cardano has no whitepaper, a stark contrast from other cryptocurrency projects. It does, however, have an elaborate roadmap with five distinct “eras”.

The five eras are Byron, Shelley, Goguen, Basho, and Voltaire. These eras coincide with major features that Cardano is striving to implement. Cardano is currently in the Goguen era and its main objective during this period was to establish smart contracts and demonstrate the abilities of the platform.

The next era that Cardano will transition into is the Basho era which will revolve around scaling the network. There is currently no launch date, but Basho is expected to arrive sometime in late 2022. Cardano has been heralded as the most “actively developed project” and it continues to demonstrate this fact through transparent, community-driven progress.

Cardano uses a PoS protocol called Ouroboros. Notably, it has been stated that Ouroboros was the first provably safe PoS system in existence. It is regularly audited by security experts and upgraded with their feedback. The only theoretical way to gain control of the network would be to control at least 51% of the ADA in existence. Ouroboros only uses a fraction of the energy needed to run the Bitcoin network.

Because it is a PoS protocol, stake pools are used instead of miners that are used in a traditional proof of work (PoW) protocol. These stake pools are often referred to as “validators” as they are responsible for checking and recording all ADA transactions and upkeeping the network. Perhaps most important of all, Ouroboros is supposedly infinitely scalable. This will enable Cardano to grow with the needs of the ever-changing cryptocurrency landscape.

The native token of the Cardano blockchain is ADA. Fittingly, ADA was named after Ada Lovelace, who is recognized as the world’s first computer programmer.

It has several key uses currently and there are many fascinating proposals for how it can be used in the future.

In addition, Cardano also has exceptionally low fees that currently sit at around $0.16 per transaction. This makes it an attractive option to use as a payment system when you compare it to other congested networks. Many enthusiasts have already set out to create point-of-sale applications that will enable them to use and spend ADA at brick-and-mortar businesses.

The Cardano network is maintained by its PoS system and as a result, ADA is immensely important in this design. Without a mining protocol, ADA is needed to reward users who act as validators to ensure the integrity and security of the Cardano network.

Staking grants holders additional ADA as a reward. This concept is similar to accrued interest from your bank account and is an incentive for dedicated Cardano enthusiasts that are holding their ADA long-term. As of May 2022, over 18 billion tokens are currently staked in over 3000 different pools.

Cardano and its governing bodies have bold ambitions for what will be achievable with the platform and many different viewpoints about which direction it should take in its development. When Cardano enters its planned Voltaire era in the near future, governance will be the main focus.

Users will be able to vote on the direction of the platform including developmental updates, new initiatives, and the use of treasury funds, with their ADA holdings acting as votes. This could be a major push towards true decentralization for Cardano and could possibly be a model that future blockchain projects refer to.

Cardano’s ADA token was launched following their successful ICO that was completed on December 31, 2016, and raised $62.2 million in fresh capital for development. The distribution of the ADA token is as follows: 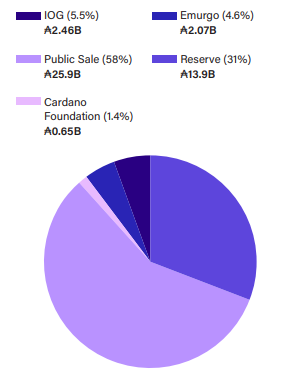 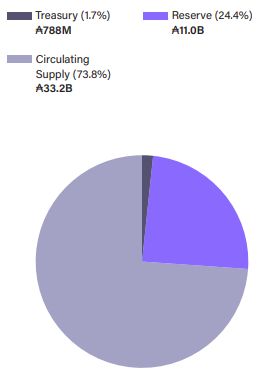 Contrary to a PoW system, where the total amount of coins or tokens are created over time through mining, all 45 billion ADA tokens were created immediately. During the five-stage ICO, 25.9 billion tokens were sold to the public and the rest were split between the Cardano governing bodies and reserves. The reserve ADA tokens are used to incentivize the validators (stake pools) in the network.

In the cryptocurrency space, “use cases”, especially business-related ones, are often the driving force behind a cryptocurrency’s value. Cardano has many use cases of its own, and far more theoretical and proposed ones will emerge as development continues.

As cryptocurrency becomes more recognized and accepted in the mainstream, there will be more opportunities for certain cryptocurrencies and tokens to be adopted by merchants for transactions. Cardano’s ADA is an ideal candidate in this regard as it has low fees, can handle a high amount of transactions, and is continuously expanding, meaning more utility in the future. This is especially true for e-commerce and the seemingly infinite applications promised in “web 3.0”.

Cardano’s launchpad for dApps is one of its most promising features. Currently, there are hundreds of Cardano dApps in various stages of completion. This demonstrates that developers see the potential in Cardano, and in fact, many of these developers are coming from Ethereum in search of a more stable and scalable solution for their dApps. 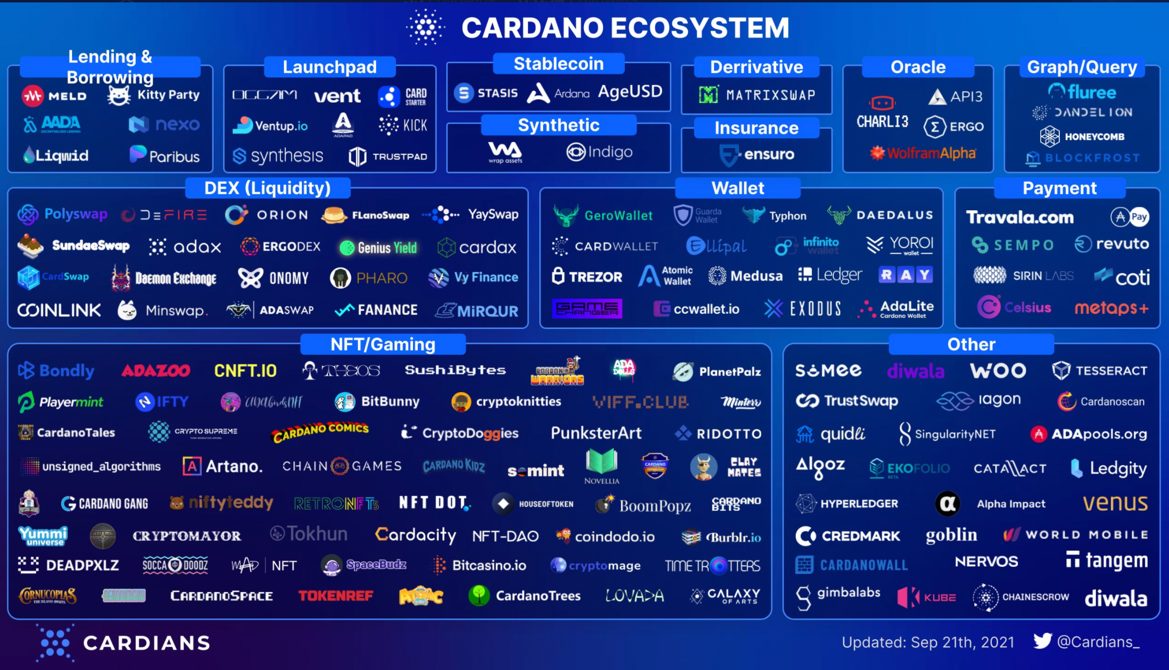 Smart contracts have quickly become one of the most captivating use cases in the blockchain space. Cardano has released their own smart contract developer portals, providing much-needed utility for many businesses. Within the first 24 hours following the Alonzo hard fork in September 2021, over 100 new smart contracts were running on the network. Since then, almost 3,000 contracts have been launched. These contracts have many different objectives including escrow contracts, loans, games, and even crowdfunding. 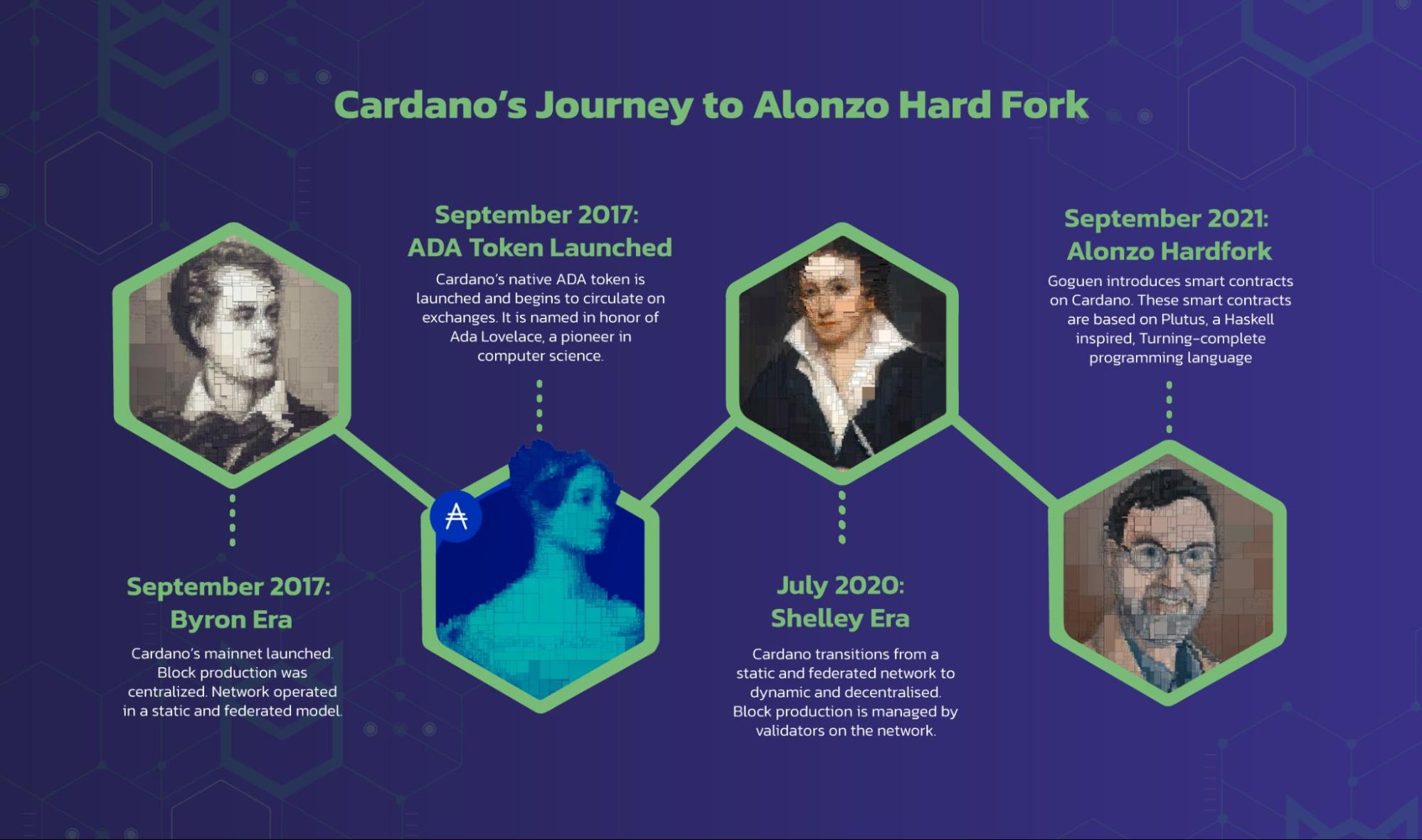 Wherever there is a need to manage metadata or traceability, Cardano has a potential use case. This extends to supply chain management and authentication services. In these scenarios, Cardano can be used to track individual components or finished products and verify that certain goods are legitimate. We have already seen Cardano partner with numerous brands to track products such as luxury spirits, coffee beans, and footwear.

While some blockchain projects come and go without much impact, Cardano could possibly be a permanent fixture in this space. As the platform continues to evolve, there will be a constant stream of new applications and services it provides.

The Cardano Foundation and Hoskinson have mainly expressed that they are pushing towards expanding Cardano’s smart contract capabilities and the upcoming Basho upgrade will focus on scaling the network overall. Cardano has proven itself to be a fascinating platform so far and many fans of the project are excited to see what the future holds.

Decentraland is a virtual world where you can buy land parcels, and create and monetize your content. Learn more in our Spotlight article!