What is Polkadot (DOT)?

After more than a decade of overcoming the odds, blockchain has won its place in society thanks to the possibilities it provides. Everywhere you look, it seems like there are people finally coming around to the tangible capabilities of cryptocurrency. This is especially true in the realm of business where companies understand that they must constantly innovate if they want to remain competitive in the current marketplace.

Ultimately, the challenge may be to find a blockchain that can handle an excessive amount of traffic and maintain the continuous development needed to support every evolving use case. In theory, this is a tall order. In practice, it seems next to impossible based on the limitations we have already experienced from blockchain in its current form. In all likelihood, numerous different blockchains will have to work together, all contributing their singular advantages to form a larger, collective whole. But with so many different networks, protocols, and developers, how can true unity be possible?

Polkadot has emerged as one potential master key to unlocking the true power of a united blockchain system. Their most meaningful ambition is to weave all of these individual chains together so that any service or application can be accessed from anywhere on the network. Polkadot has quickly become one of the top cryptocurrencies by market capitalization and garnered massive support from the crypto community.

The history of Polkadot

Polkadot has a regal lineage as a product of Dr. Gavin Wood. As one of the original co-founders of Ethereum, Wood has been around the cryptocurrency space for years and is also credited as the creator of the Solidity smart contract language. In late 2016, Wood completed the first version of the Polkadot white paper, bringing the fully-fleshed-out idea into the world.

After a series of different efforts demonstrating proof that the concept was functional, including full trials on different testnets, the Polkadot mainnet launched on May 26, 2020. Since then, the team has been steadily building and adding new upgrades and developments. Meanwhile, the DOT token has gained fans worldwide while enjoying continuous listings across the biggest crypto exchanges.

Polkadot has an ambitious goal in mind: interoperability. For blockchain technology to truly spread to every corner of the world, each network will eventually be forced to intermingle. The protocol that Polkadot has implemented allows unique blockchains to securely talk to one another, even though their underlying tech may be at odds. This enables a flow of data across chains to facilitate a wide range of applications.

The challenges that this industry faces are staggering. Beyond the regulators, beyond the naysayers and doubters, and even beyond the financing, the biggest roadblock to mass adoption has proven to be scalability. The limitations that Ethereum and Bitcoin have experienced during times of peak use have been debilitating. For instance, it seems as though it takes just one killer app or highly-anticipated NFT to slow the Ethereum network to a crawl.

Where some scaling solutions may act as an intersecting highway to alleviate a large portion of the traffic, Polkadot can be visualized as a roundabout. All the data from different blockchains reaches one central loop, all flowing together before it finally exits in the direction it needs to go. It is both efficient and scalable, and it achieves this through the use of many parallel chains, or “parachains.”

Polkadot’s architecture has been called one of the most innovative in the cryptocurrency space. Thus far, overcrowded networks like Ethereum and others delegate some of their traffic to Layer 2 (L2) solutions. These L2 networks are protocols that run on top of an existing blockchain. Users have accepted these options with open arms, and as a result, much of the value from Ethereum transactions have been siphoned away to alternatives like Polygon and Loopring.

Instead, Polkadot considers itself to be something more akin to a Layer 0 solution. Instead of running as an individual network on top of Ethereum or Bitcoin, Layer 0 solutions connect blockchains at the base level, directing so-called “parachains” (individual blockchains) to one center relay chain that is a gateway for the data. In this sense, you can think of the relay chain as a bicycle wheel hub, with the connected parachains being the spokes of the wheel.

Polkadot also employs a variant of proof of stake called nominated proof of stake (NPoS). This was decided on with certain principles in mind, namely fair representation, increased security, and decentralization. This staking system allows users to contribute directly to the network by becoming either a validator or a nominator.

Nominators vote their approval of validator candidates and then back them with their tokens. Next in the process, a committee of appointed validators will elect new validators from the pool of selected candidates. There are heavy economic incentives involved, as well as certain risks.

Since validators and nominators lock up their tokens to receive rewards, there must be a measure of trust between these parties. Validators could potentially become negligent by going offline or even attacking the network. Because this puts everyone’s rewards at risk for slashing, meaning that validators will be forced to relinquish a portion of their stake, these actions are discouraged by the protocol.

How does Polkadot achieve interoperability?

To achieve interoperability, Polkadot implements the use of blockchain bridges. These bridges allow for arbitrary data to seamlessly transfer from one chain to another. Because it is simple data that is being delivered, and the associated blockchains do not conflict with one another, a large number of protocols, governance, and rules can coexist in harmony.

All data that is passed between networks is enabled with XCM, a cross-consensus messaging format. Developers have been adamant that this is not a protocol, meaning that it does not send messages by itself. XCM only indicates the sending and receiving format for connected chains.

There are currently 1.11 billion DOT circulating the open marketplace with a total of 1.22 billion in existence. During its initial coin offering, there were only 10 million DOT in existence and 50% of this was divided among investors. Polkadot later decided to increase the total amount of DOT from this original 10 million figure to 1 billion in a process called redenomination. Essentially, all DOT was split into smaller fractions, meaning no holders were affected as they still controlled the same percentage of the overall amount as before.

This brings up a critical detail. Like Ethereum, there is no maximum supply of DOT. This token is inflationary and is meant to rise 10% annually. This may potentially put this token at odds with spectators that believe in the principle of a token hard cap and the deflationary metric that some cryptocurrencies abide by. However, it may give Polkadot the ability to change with the multiplicative rate of adoption that is expected in the coming years.

How is the DOT token used?

When Polkadot was first conceived, it was immediately clear that the DOT would have a few vital roles in its ecosystem. While all cryptocurrencies have certain speculative properties, DOT goes far beyond this surface-level role.

Holders of DOT can:

Staking is the process of delegating or locking up your DOT in exchange for rewards. When you stake DOT, you have the opportunity to earn passive rewards, while participating in the security of the network. For long-term believers in the project, or anyone that wants to increase their DOT holdings without trading, this may be a useful feature.

When you choose to stake your DOT with CEX.IO, you’ll enjoy some immediate benefits that may be difficult to find elsewhere. CEX.IO allows for no-lockup staking, meaning you are free to withdraw your holdings at any time. You can also begin with as little as 1 DOT, creating a low barrier to entry for both experienced and curious market participants. For more information on staking and the coins we support, refer to our staking section.

Polkadot has been called everything from “the most ambitious blockchain” to a “bet against maximalism.” The excitement surrounding this project is palpable as developers are flocking to the Polkadot platform in droves. Contained within the DOT ecosystem are several other projects that either help it to achieve its goals or add to its value synergistically with inventive abilities.

Here are just a few of the biggest names in the Polkadot ecosystem: 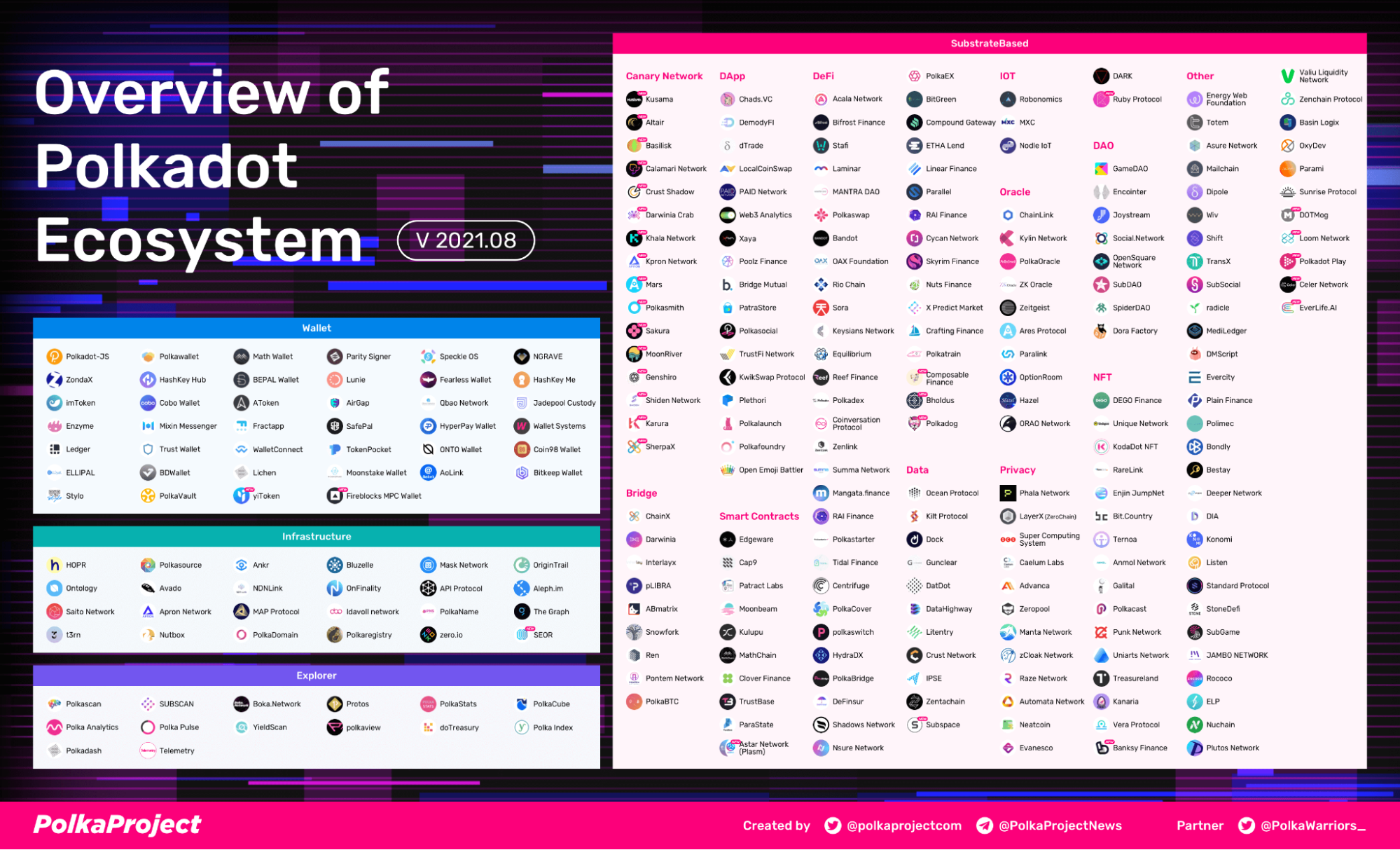 Determining which crypto to pick from a pool of assets can be quite overwhelming. Luckily, Harvest Finance is here to help you. Learn more in our blog post!

We’ve released a new Spotlight! Check out what Polygon has to offer and what makes the Polygon platform and its native token MATIC so special

Did you know that Tron hosts almost half of all Tether (USDT) tokens? Find out more about these and other Tron ecosystem features in our spotlight!