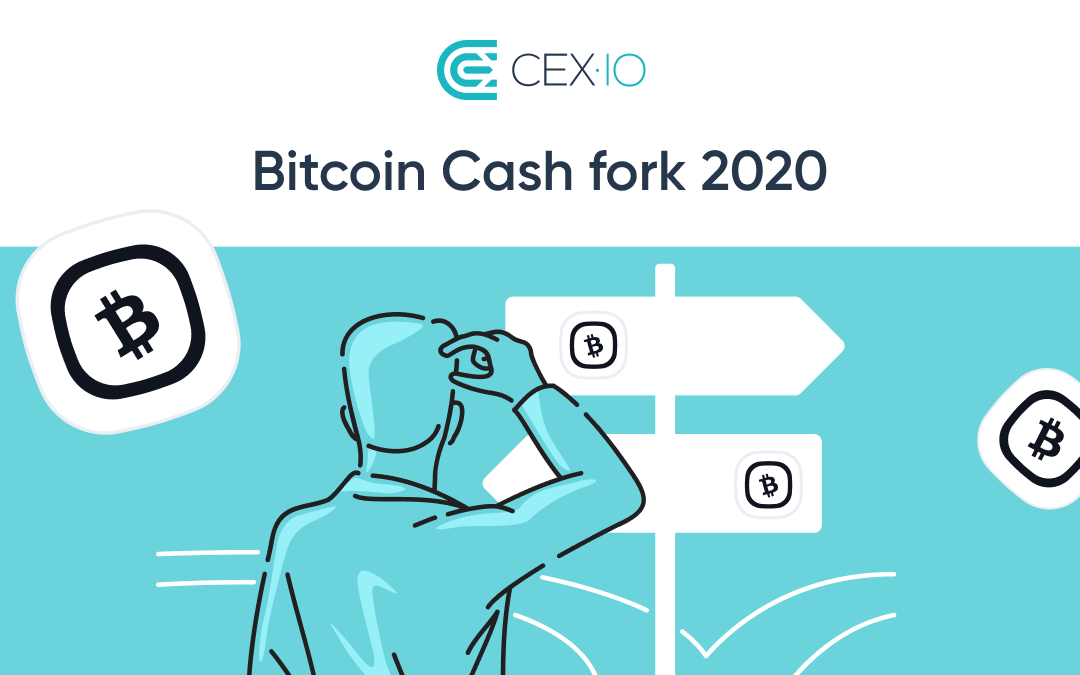 The Bitcoin Cash (BCH) network is slated to undergo a hard fork on November 15 at approximately 12:00 PM UTC.

The current Bitcoin Cash blockchain will most likely split into two chains: Bitcoin Cash ABC (BCHA) and Bitcoin Cash Node (BCHN). Based on this, we expect a hard fork that may result in the creation of an additional token.

Should the Bitcoin Cash hard fork with a split occur, CEX.IO will support it and credit a new coin to customers’ balance at a 1:1 ratio.

This means, if you have, for example, 100 BCH on your CEX.IO account right before the fork, we will allocate 100 more new coins to your balance.

So, if you want to be among the first to own the new crypto after (and if) the Bitcoin Cash network splits, you need to have BCH on CEX.IO balance before the scheduled fork.

The core factor that led to the BCH fork 2020 is a disagreement between the two camps in architectural changes to the networks.

BCHA and BHCN teams run the nodes that offer certain improvements to the blockchain and hence the network performance.

However, the BCHA team also intends to add an Infrastructure Funding Plan (IFP) to their chain software, which means assigning 8% of block rewards to developers. Given that, miners will receive only 92% of their reward. Bitcoin Cash Node (BCHN) camp does not agree to share miners’ rewards with developers.

This aggravated the disagreement to an inconceivable level and triggered the fork that we all are expecting now.

According to data from Coin.Dance currently, BCHN chain has more support compared to BCHA, though we will see the final outcome on November 15, 2020.

🙌 How CEX.IO will handle the fork

When blockchain undergoes protocol upgrades like hard forks, the existing ledger splits into two. It becomes theoretically possible for attackers to start replay attacks against blockchain ledgers. What does it mean? A transaction processed on one, an old ledger, can also be valid on the other — a new one. As a result, the attacker replicates one transaction into two ledgers and fraudulently transfers a double amount of cryptocurrency to his wallet. This is what a replay attack means.

Replay attack after the fork in this particular case means the transaction in the hypothetical BCHA network can be “replayed” in BCHN network too. This results in double-spending and loss.

To maintain the safety of user funds during the hard fork, CEX.IO will implement our protection strategy and handle the hard fork as follows:

BCH trading on CEX.IO and on CEX.IO Broker will not be affected. You will be able to trade during the hard fork. However, when trading BCH on CEX.IO Broker, please note that liquidations are possible under high price volatility.

Please plan your activity on CEX.IO accordingly. We also recommend following our Status page to be in the know of current platform updates.

In the scenario that the Bitcoin Сash network splits, we’ll be closely watching the community and other exchanges’ response to it.

CEX.IO will take the position aligned with the majority of market participants as to what chain to treat as the future BCH chain and what coin remains actually BCH with the relevant ticker.

We will send the token of the minor chain to all eligible CEX.IO customers in accordance with the snapshots of BCH balances made before the fork.

It may take up to a couple of days to allocate the new coins. First and foremost, we’ll need to take all necessary measures to process all the transactions securely and make the respective calculations. We’ll give more details regarding this distribution in a separate announcement.

CEX.IO team considers launching trading of the new coins against USDT if we see such community demand. Should we make such a decision, we’ll share this news on our social media channels.

A few more days remain before the planned fork. We’ve fastened the belts and sit tight closely following the event. You in the meanwhile can check your BCH balance if you don’t mind having some free coins in case the fork with a split happens.