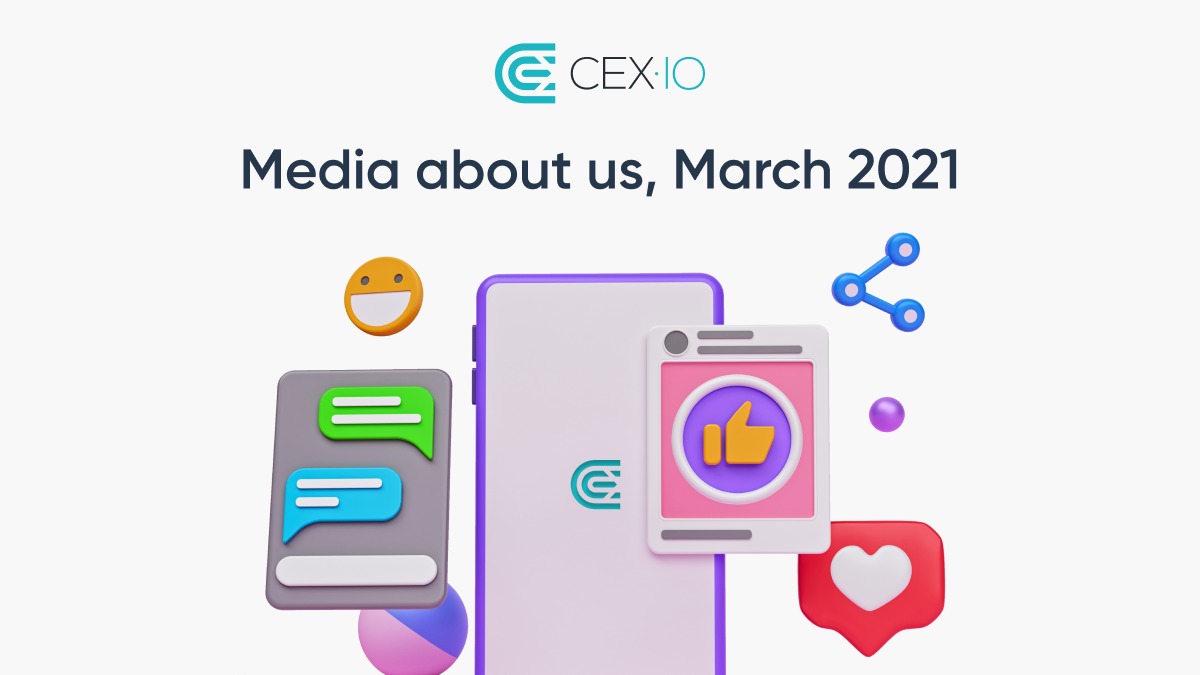 In March 2021, it seemed like crypto markets had been dancing the tango – one step forward, two steps backward, repeat. We can call it neither a rally month nor a fully stagnant month. March was rather keeping crypto enthusiasts hanging on the edge of their seats. Bulls or bears, up or down? Maybe sideways, or even take a detour? Or stand still and hodl for life? Read on how our experts spoke about the market performance and not this only.

Here are the topics that they talked about in March:

So now it’s time to kick back, get yourself a cup of your favorite drink and reflect on what happened in the crypto world during the last month. The first quarter of 2021 is already behind and it’s time to make some valuable conclusions and plans for the future as well!

As always, our experts commented on the most hyped news of this period.

CBDC – to be or not to be, upcoming FCA licenses, and the challenges of DeFi growth – there are the burning themes that our experts discussed in March. Take a look at these publications and be in the know of what to expect on the crypto horizon over the upcoming months.

Decentralized finance reintroduced a multitude of financial services in a different way. What was previously the exclusive privilege of banks, became available for anyone with capital. But the decentralization question still remains open. These projects basically run on smart contracts on a blockchain, the Ethereum blockchain in most cases. For many people, this is imperative for choosing centralized exchanges to store funds with. At CEX.IO, we get all the proper financial licenses to conduct operations in a law-compliant manner.

The growth of DeFi – what role do exchanges have to play here?

Just recently there has been news of how a new digital dollar prototype may be introduced in the US within the next several months. With that being said, let’s take a closer look at what pros and cons governments would have to deal with if and when they choose to introduce a CBDC. Central banks would have to dedicate many resources in order to create a truly efficient state-backed digital currency system, but it could have many advantages in the long term, believes Konstantin Anissimov.

The United Kingdom’s financial regulator the Financial Conduct Authority is currently in the process of analyzing a plethora of applications from crypto asset businesses looking to continue trading; the regulator is assessing applicant rm’s compliance with the UK’s Money Laundering Regulations. Jurisdictions like Malta and Gibraltar had some level of reputational challenges because of their association with gambling” explained Konstantin Anissimov.

🧰 Bitcoin as a hedging asset

There is a notion that Bitcoin prices are not affected by the conventional economy. Interestingly enough, Bitcoin behaves differently from country to country and local events show to have a significant impact on its demand. Here’s a selection of articles where our experts analyzed Bitcoin in light of the local political and economic events of certain countries.

Egyptian user registrations on CEX.IO rose 250% in January from the previous month. According to our executive director, Konstantin Anissimov, Bitcoin (BTC, +1.05%) trading volumes in Egypt on CEX.IO were also up more than 400% from December to January, reflecting trends seen by other crypto platforms in the country. “For Egypt, I haven’t seen anything like that on our exchange,” Anissimov told CoinDesk, referring to the spike.

Thailand’s Securities and Exchange Commission released a statement that it plans to enact a 1-million-baht (about $33,000) annual income minimum requirement for crypto investment in the country. Konstantin Anissimov thinks that if a majority of the lower-income population did not have any basic financial education and understanding of the risks of such investments, the SEC’s approach may have been the only way to protect the public’s best interests. Anissimov added: “Multiple approaches can be taken, and minimum income is just one of them. I am sure that the Thai SEC will take on the feedback received from the investment community and act in the interest of its population.”

Central bank instability tends to attract people to cryptocurrency. As the lira dropped at the end of March, internet searches about cryptocurrencies spiked in Turkey. Crypto exchanges do not need licenses to operate and there are currently no specific tax laws that apply to crypto. For instance, the average daily registrations of Turkish users on CEX.IO since March 14 is 783% higher than the first half of March and February, according to Konstantin Anissimov.

Crypto is not regulated in Turkey, and it’s thriving

🌪 BTC and ETH are dancing on the edge

In the light of the latest events on the crypto market, we wouldn’t be surprised… well, of anything, basically. Our experts share a deeper knowledge of price trends and world events affecting cryptocurrencies. Read these articles to see the bigger picture behind figures and graphs.

Institutional demand for Bitcoin from investors and corporations has been a big driver of price gains over the past year: The cryptocurrency has gained 65% this year after quadrupling in 2020. But this MicroStrategy effect might be wearing off, raising questions over what level of buying – or economic indicators – might be needed to spark a fresh rally, given the cryptocurrency’s outsize gains already. While the foundations of Bitcoin remain strong, the coin is under much pressure to return gains to corporate investors who may need to declare earnings for the quarter, according to Konstantin Anissimov.

Bitcoin’s price has taken a few dips since it hit an ATH of $58,330. However, what often gets forgotten is the fact that Bitcoin’s price is up 72% year to date. With a press time price of $47,162, the cryptocurrency had dropped by nearly 5% in the last 24 hours. However, while this may be a pullback in the short term, it’s not a setback in the long term. Konstantin Anissimov noted, “The jump above $52000 level yesterday, for the first time in a week showed that it is a retracement and selling pressure on Bitcoin has increased.”

What should traders know about the current Bitcoin pullback?

Bitcoin (BTC) has been experiencing some selling pressure in the last few weeks of March. This is something that could be related to corporate investors selling a portion of the BTC they purchased in the last months to declare earnings for this quarter, according to Konstantin Anissimov, the Executive Director at CEX.IO.

Bitcoin could be experiencing selling pressure from corporate investors

Over the course of the last few days, Ether has shown an increasing amount of stability, with the premier crypto staying afloat above the $1,800 mark for nearly five days running. In this regard, it bears mentioning during yesterday’s trade cycle, ETH touched a price point of $1,933 only to dip once again. Konstantin Anissimov says that this is not the first time that Ethereum’s performance has been brought into question especially since the coin has previously exhibited similar behavior around February 11th, adding that at the time, Willy Woo, a popular crypto analyst, stated that a possible explanation for the stagnation could be that while BTC is a better multi-cycle HODL, ETH is a better mid-macro swing trade.

The total number of Ethereum ERC-721 smart contracts, which form the backbone of most non-fungible tokens (NFTs) on the blockchain, has reached a new all-time high on the heels of the current NFT boom, according to CoinMetrics’ report. Per the report, the number of ERC-721 smart contracts has recently reached a new all-time high of around 19,000 as a result of the latest “NFT mania.” Konstantin Anissimov argued, “there are clear indications that the NFT market is hyper-inflated in terms of the unprecedented valuations of some of the items sold thus far, including Beeple’s EVERYDAYS: THE FIRST 5000 DAYS, which sold for $69.3 million.”

Solana has time and again been grouped alongside a number of other so-called “Ethereum Killers” such as Cardano, Polkadot, Tron, since it boasts of a transaction throughput rate (TPS) of more than 50,000 tx’s per second. And while Ether’s 2.0 upgrade was touted to amp up the currency’s native tx capacity upward of the 100k mark, the number still continues to hover around just 14 transactions per second. Commenting on Ethereum’s current state, Konstantin Anissimov said that while the platform has its problems — such as the high gas fees, scalability issues — there are a number of other factors as well that work in the currency’s favor.

The flagship cryptocurrency’s prospect of hitting new highs rose after a Deutsche Bank poll of online brokerage users revealed that retail investors would use 35 percent of their stimulus benefits to investing in the stock market. Jim Reid, a research strategist at Deutsche Bank, confirmed that young, aggressively cohort investors would take riskier and overleveraged bets to magnify their potential gains and losses. Drawing from the potential rollout of the $1.9 trillion stimulus package from the US, the coin is bound to surge above this ATH price levels in the coming weeks, said Konstantin Anissimov.

It’s not like we’re trying to brag or anything, but we’ve been working hard for years to provide the best service to our customers. Finally, our effort is acknowledged in the trusted independent rating CryptoCompare. We are excited to be ranked so high and we are sure that we will strive to become even better in the future.

CEX.IO was ranked among the top 10 digital asset exchanges in the February 2021 CryptoCompare Exchange Benchmark rating. According to the report that compared more than 160 providers around the world, CryptoCompare ranked CEX.IO as the third most secure cryptocurrency exchange on the market. At the same time, we secured the 8th spot overall with an A grade. In addition to the current rating, CryptoCompare has ranked us as the third most secure exchange service in its July 2020 Exchange Benchmark Report. While CEX.IO has secured an A grade both times, we have now moved upwards in the list, taking 8th place among digital asset exchanges.

CEX.IO secures the third spot among the safest cryptocurrency exchanges

Two leading cryptocurrencies, Bitcoin and Ether, have been hovering near their resistance levels, leaving the market watchers in the anticipation of the unknown. Konstantin Anissimov, Executive Director at CEX.IO, warns about slight corrections, yet his expectations for the annual perspective are positive.

Have you come across important insights during the month of March? What is your opinion on all the abovementioned events and analytics? Feel free to share with us on our Telegram channel https://t.me/CEX_IO.

Keep following us and enjoy watching yourself becoming a crypto expert!

We’re bringing new listings as well as a feature our U.S. users have long been demanding — CEX.IO Staking.

Good news! CEX.IO is cutting its trading fees to help traders with optimizing their operations. Check out the updated fee schedule!