Why you should never send your BCH to BTC address 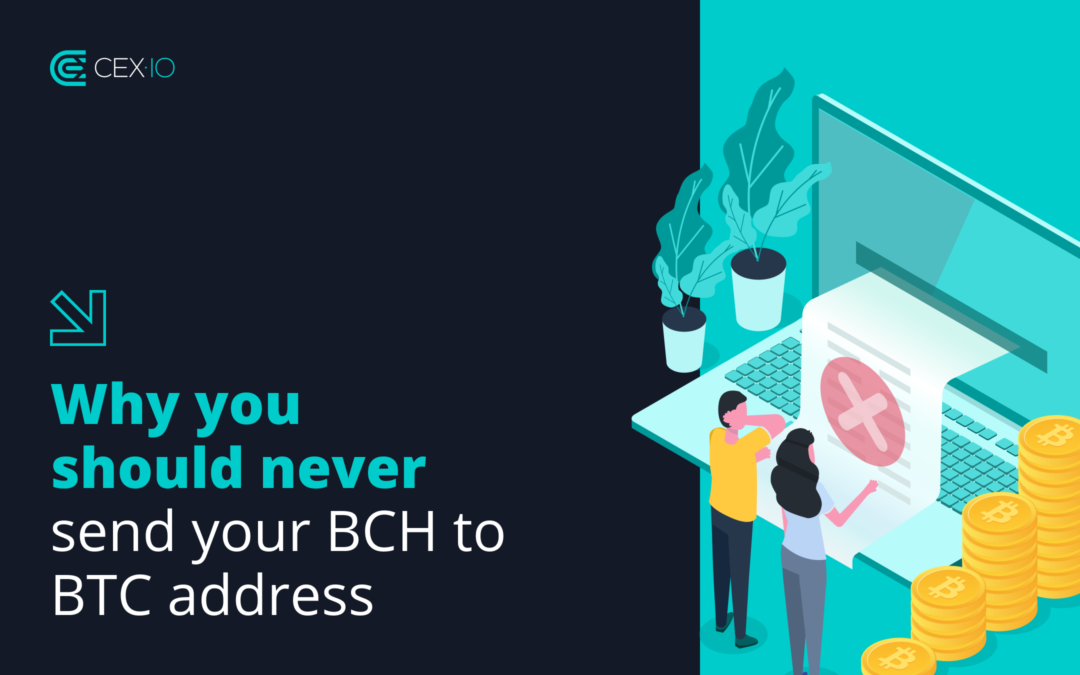 In the Bitcoin and Bitcoin Cash networks, addresses have the same format and look similar. This is confusing, and many people mistakenly send Bitcoin Cash (BCH) coins to Bitcoin (BTC) wallets. However, these two currencies run on separate blockchains. That means when you send your BCH to a BTC wallet, your coins may be gone for good.

In this post, we look deeply into the differences between BCH and BTC and explain why it’s important to be super attentive when transferring crypto.

The Bitcoin Cash (BCH) network was created with the idea to increase the number of transactions that can be processed each second compared to Bitcoin.

The only way to update the Bitcoin blockchain is with a hard fork. So BCH developers split from the BTC network and literally created a new blockchain with modified rules. Bitcoin Cash uses the same codebase but with a block size limit of 8 MB and without support for SegWit* transactions and addresses. BCH developers believed that with increased block size, the network could handle more transactions per second. For comparison, at the time of the split, Bitcoin Core (BTC) had a block size limit of 1 MB.

When Bitcoin Cash was created, it shared the same address format as Bitcoin. As a result, BCH and BTC holders were mixing up addresses. A lot of users sent their BCH coins to BTC SegWit wallets, which are not supported by the BCH network. Therefore, the coins simply got stuck in the blockchain with no way to restore them.

*SegWit stands for Segregated Witness. It’s the name of protocol updates for increasing BTC network scalability. SegWit removes the signature (witness) from the middle of transaction data and places it at the end, outside the block. Thus, SegWit makes transaction sizes notably smaller, allowing more transactions to be processed in one block.

How can you prevent your funds from getting stuck or lost in the network? Well, the answer is simple: double-check the wallet address you’re sending crypto to.

In order to avoid confusion with addresses, BCH developers later proposed a new unique format for BCH wallets. It’s called CashAddr, and it has a totally different format that starts with bitcoincash: or a lowercase q or p. You can easily compare the old legacy format to the new Cashaddr format on the BCH deposit page on CEX.IO.

Thanks to the new format, the number of mistaken transactions decreased. However, the possibility to send BCH coins to BTC addresses still exists, and up to 18,000 BCH remain stuck in the network.

🤔 What happens to these mistaken transactions?

It’s possible to mine the BCH coins sent to BTC SegWit addresses, but it requires hard effort.

In 2018 and 2019, some mining pools managed to claim back a lot of lost coins and return them to their individual owners. They got access to the stuck transactions by using a non-standard Bitcoin Cash transaction script available only for Bitcoin Cash miners. Regular users cannot send the necessary type of transaction to the blockchain.

Still, not all miners agreed to return funds to the owners. There’s still a buzz around one unknown miner who managed to mine enough blocks to sweep about 9,000 BCH. This lucky individual took all the coins as their own instead of returning them to their owners.

Meanwhile, BCH developers are still trying to fix the issue and make it impossible to access BCH coins that are locked in the network.

🛠 What CEX.IO has done to prevent users from sending BCH to BTC wallet addresses

Currently, CEX.IO has no technical possibility to restore BCH coins that are sent to BTC addresses. The reason is that we do not have access to those coins — they are locked in the BCH network. This is not a shortcoming of CEX.IO or any other exchange but rather a vulnerability of the Bitcoin Cash network.

Over the years, BCH developers and technical teams of other crypto platforms have been trying to find a solution to prevent loss of funds. Remember that you’re the only one who has control over your funds and only you can confirm a deposit or withdrawal operation. Always check the currency you’re sending and the destination wallet. Even a little mistake can send your funds to the wrong wallet address. Sometimes, with complicated and costly technical efforts, it’s possible to restore lost coins. However, there’s no way to return BCH coins sent to a BTC SegWit address.

If you aren’t sure about your wallet address or have any questions, you can easily contact the CEX.IO Customer Support Team by phone or via the form on our Help Center. You may also find our guides on crypto deposits and withdrawals helpful: