CEX.IO Response to US Department of the Treasury Secretary Mnuchin’s Press Conference on Digital Assets and Cryptocurrency 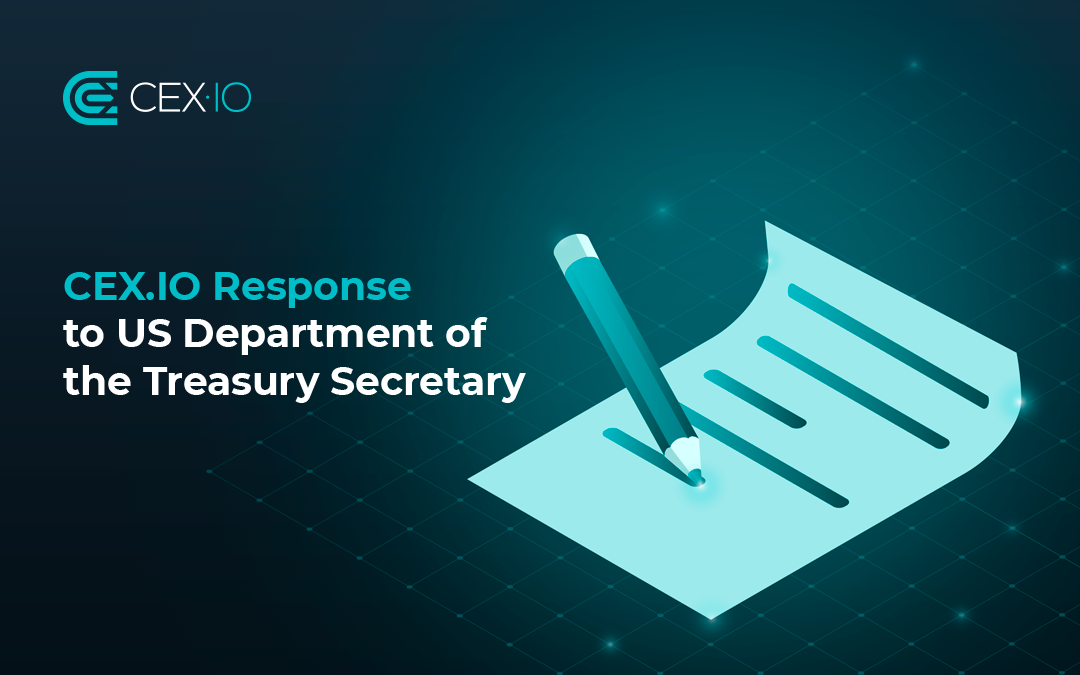 CEX.IO remains steadfast in our commitment to developing a secure, transparent and fair ecosystem which will continue to foster the growth and adoption of digital assets.

At CEX.IO we have continued to embrace the examination and scrutiny that regulation brings, because we understand that is what it takes to earn the public trust. Digital Assets and cryptocurrencies are not a threat to national security.  Through effective controls proposed by Treasury Secretary Steven Mnuchin, the benefits of cryptocurrency and blockchain technology can be utilized by the American public and revolutionize the financial services industry.

As per Secretary Mnuchin’s explicit guidance that digital assets businesses must comply with FinCEN registration; CEX.IO sought registration from FinCEN within the US Treasury as a Money Services Business in 2015; willfully holding ourselves to the highest standard available. Since then CEX.IO has performed 3 successful independent MSB audits. CEX.IO had the foresight to purposely avail itself to the regulations of FinCEN long before there was a call to action. As a regulated financial institution, CEX.IO concurs with the sentiments of Secretary Mnuchin, that “providers of digital financial services [ ] must implement the same anti-money laundering and countering the financing of terrorism, known as AML CFT, safeguards”.

As CEX.IO has done for years now, we will continue to comply with the regulatory requirements for money transmitters of cryptocurrency and adhere to the relevant Bank Secrecy Act obligations as we maintain registration with the Financial Crimes Enforcement Network. Unequivocally, we at CEX.IO understand that we employ greater controls, far more enhanced security features and more sophisticated technology than many traditional banks.

Secretary Mnuchin’s comments align with the CEX.IO’s fundamental principles of providing a safe, accountable and regulated exchange for our customers. We believe that growing the overall adoption of digital assets will allow a greater portion of the population to benefit from blockchain technology. The benefits of a decentralized transparent and immutable ledger will greatly improve the fairness and accessibility of the world financial system.

Bitcoin is rooted in math and its value is protected by the trust of the community. This emerging technology will bring greater financial autonomy to the individual. A more efficient transfer of value will inherently benefit all persons and economies, regardless of jurisdiction.

CEX.IO currently serves 227 countries and territories, which means we have adopted a careful and nuanced strategy to comply with the patchwork of regulations for all jurisdictions. CEX.IO has contributed to educating regulators to advance policy to benefit this growing community. Our work in the United Kingdom with CryptoUK and the Blockchain and Virtual Currencies Working Group in the European Union, as well as our collaboration with the Gibraltar Financial Services Commission, all demonstrate CEX.IO’s commitment to crafting prudent policy around this emerging asset class. Moreover, CEX.IO welcomes the opportunity to contribute to the United States Treasury’s Financial Oversight Council’s working group on the digital asset to further advance the policy and bring greater clarity and education to legislators.

In August 2019 the CEX.IO team will be presenting at the 2nd Southeast Asia Cryptocurrency Working Group Meeting hosted by the United Nations Office on Drugs and Crime. Whereas less than a year ago, in September 2018, our team presented on the importance of a Risk-Based Approach in cryptocurrency businesses, particularly elaborating on the possible risk mitigators involving privacy-enhanced virtual currencies (e.g. Monero, Zcash, etc.) during the Joint EAG/FATF FIntech and Regtech Forum held in Hangzhou, China.

CEX.IO continues to be committed to pursuing our strategy of becoming a global regulated exchange. We invite you to join us in the digital revolution.