XDC provides users with quick trade transactions, tokenization, and digitization of crypto assets. Technically speaking, it is a hybrid blockchain network operating on the XSPoS (delegated proof of stake) consensus mechanism. It uses the XDC01 protocol, which was created to support the AML/KYC layer and the smart contracts layer. 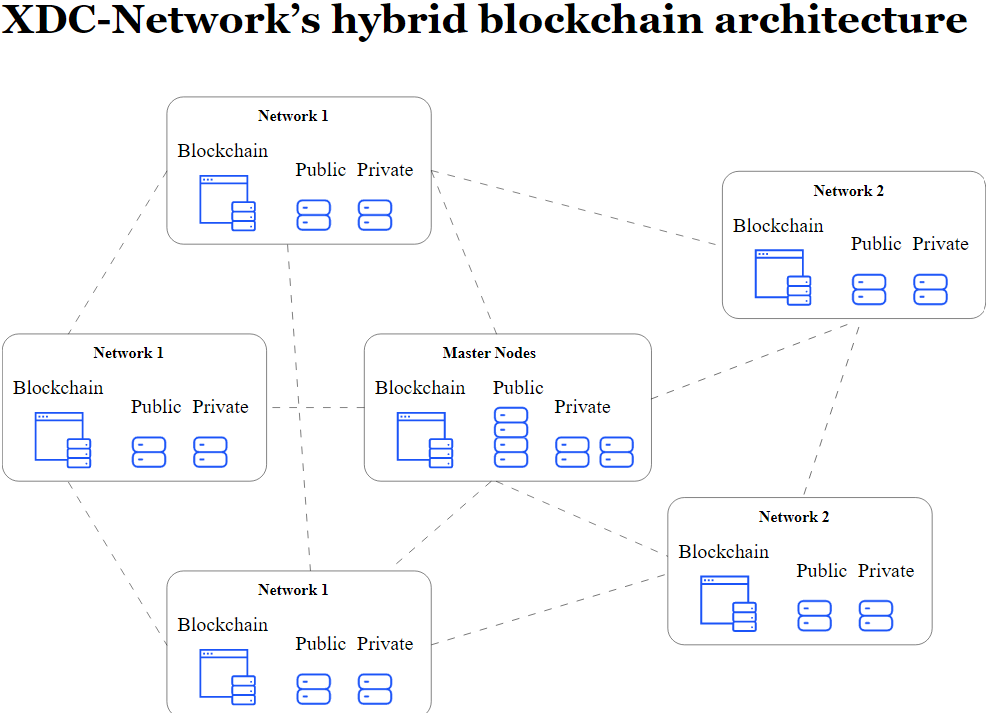 Since this blockchain network features a hybrid architecture, it is developer-friendly and allows interoperability for the blockchain users. Simultaneously, it also enables spontaneous block finality and hybrid relay bridges, resulting in high transparency

This network focuses on international finance and trade, made possible by its scalable and highly secure commercial-grade architecture. In other words, the XDC network’s hybrid architecture makes it possible to repair the loopholes in global trade and financing. Consequently, financial industries can use this network’s smart contracts to achieve real-time and instant settlements.

Core Use Cases of XDC

Bitcoin and other groundbreaking decentralized networks were iconic achievements. However, XinFin has taken things a step further in expanding its predecessor’s idea of a global decentralized payment system.

XinFin has successfully built a global network of computers that links users to a marketplace brimming with dApps (decentralized applications). On the users’ end of the spectrum, this network provides unprecedented user control, security, and efficiency.

XinFin powers numerous innovative applications in everything from supply chain management, identity management, and advertising, to web browsing and finance. Additionally, XinFin is a permissionless blockchain, meaning that no central authority oversees the development and creation of applications. Its permissionless nature creates a safe space for experimentation, which has led to numerous dApps built on this blockchain network. Some of the most significant and well-known uses of XinFin include:

The Issues That XinFin (XDC) Solves

As mentioned above, the XDPoS mechanism is at the core of the XDC network. This mechanism represents a decentralized transaction validation system, meaning that it validates the transactions that occur on the XDC hybrid blockchain.

Unlike other consensus protocols, this delegated proof of stake mechanism selects a pool of delegates (validators) through real-time voting. Conversely, preserving the sanctity of the XDC Hybrid Blockchain falls entirely onto the chosen validators. These individuals perform numerous functions, including:

Consequently, there are four fundamental issues of a public blockchain network that the XDC Network solves. These include:

XDC stands for XinFin Digital Contract and this token is the native cryptocurrency that powers the XinFin blockchain. Consequently, it also allows developers to generate new types of XDC-based tokens that use smart contracts to power dApps. Keep in mind that the majority of XDC-based cryptocurrencies are based on the XRC-20 token standards.

Simultaneously, XinFin smart contracts represent a crucial innovation in blockchain technology. On the XinFin network, smart contracts are self-executing contracts that enforce, verify, and facilitate transactions on the blockchain.

Securing the XinFin network takes place with the help of Masternodes and validator nodes. Validators reject or accept transactions before Masternodes can append them to the blockchain. Additionally, every validator must establish a UNL (Unique Node List) for storing information about the nodes they interact with regularly.

Among other functions, Masternodes exist to facilitate the network’s decentralized governance and append blocks of transactions to the blockchain.

If you are looking to earn more XDC — in addition to the ones you already have — staking can be a viable option. You can stake XDC as a network member (Masternode) and earn XDC rewards on the network.

Staking involves holding funds in a crypto wallet for the purpose of supporting the blockchain network’s operations. In essence, this process requires locking in your cryptocurrencies in exchange for receiving rewards.

Decentraland is a virtual world where you can buy land parcels, and create and monetize your content. Learn more in our Spotlight article!