At its core, the competition between Bitcoin and Ethereum is more perception than reality. The disconnect is the result of a general misunderstanding of the relationships between the networks’ functionality and their fundamental goals, set within the context of the digital/physical economies, and investors’ heavy focus on return-based metrics. The roots of Bitcoin and Ethereum are grounded in separate forces within the blockchain ecosystem, which often ebb and flow at different paces. The advancement of the cumulative ecosystem relies on chains from each force to work in tandem, reacting to each other, as opposed to fostering a competitive relationship that requires one to fail relative to the other.

It may be the case that a network grounded in one force grows faster and/or produces higher returns for investors than the other. Though this happens, metrics around this notion shouldn’t serve as points of comparison that link the forces of blockchain. Using such measurements as a comparative benchmark is counterintuitive to the ultimate goal of the ecosystem, and ignores its fundamental composition.

The two ingredients that support blockchain as an ecosystem can be reduced to digital scarcity and digital utility. The composition and goals of each force are built on diverging infrastructural bases and are aimed at attaining different outcomes. The only aspect they have in common relates to their goals of digitizatizing the global economic and financial plumbing, which requires cooperation as opposed to competition.

What is digital scarcity?

Digital scarcity is the result of blockchain’s application to the creation of finite and hard assets. The scope of an asset on this end of the spectrum is to serve as a universal store of value that is used as the denominator of the digital and physical economies. As a result of this, holding properties such as cemented policy, systematic and fair distribution, input expenses for production (and its subsequent impact on network security), and robust decentralization are vital to their effectiveness and long-term success. Digital assets that fall into this category leverage a unique set of operational traits, including Proof-of-Work (PoW) based consensus mechanisms and rigorous processes of making amendments to the chain’s function or capabilities, which separates them from their utility-centric counterparts.

The manifestation of digital scarcity in BTC

Bitcoin sits at the helm of digital scarcity. The chief qualities of Bitcoin that characterize digital scarcity as a whole include its solidified monetary policy, the process by which it is discovered, and, most importantly, its supply cap of 21 million coins.

Bitcoin is difficult to alter. Only two major updates have passed since 2017 (Segregated Witness and Taproot), and the network’s functionality and capability remain largely consistent. Further, the network’s monetary policy (or the rules that govern its supply schedule), including its defined supply cap, will remain unchanged for as long as the asset is in existence. The simple formula, produced below, will be used to govern BTC supply generation until the final satoshis are mined. 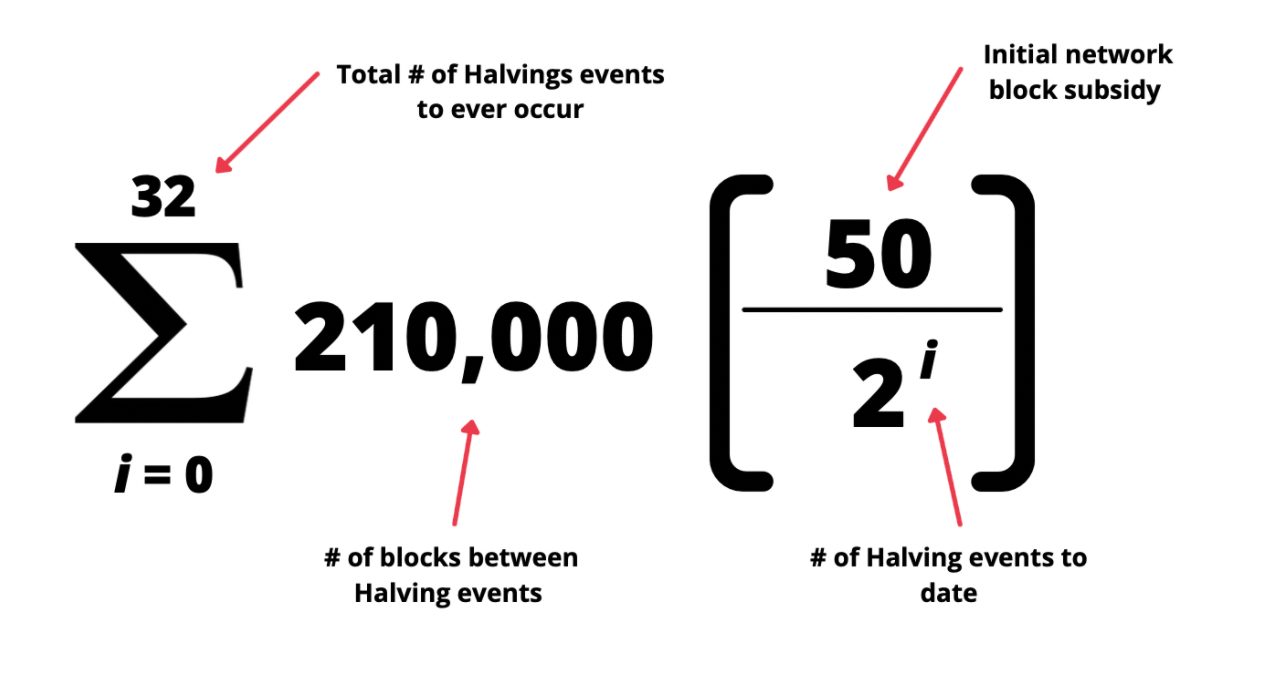 The steadiness and infrequency of change in Bitcoin’s most important processes is an essential feature exclusive to digital scarcity and the relative success of networks in the category.

Every individual, entity, or country in the world has equal access to the initial creation of coins as it relates to digital scarcity. The PoW consensus mechanism is the necessary element of BTC and digital scarcity that allows for the fair distribution of, and a competitive environment around, the creation of new supply. PoW networks don’t distribute supply until users voluntarily join the network to discover it (no premine or presale), and require input resources in the form of energy and hardware to generate new coins. This requirement in the process of discovering supply associates a cost with discovering new Bitcoin (new coins aren’t free), and adds a competitive, game theory element to those who are working to obtain new supply. Competition among those discovering new BTC has a positive feedback loop for network security as each party works to outperform the other, and is an outcome that can only be achieved by the structure of its corresponding force.

The creator(s) being unknown is another characteristic that is exclusive to Bitcoin and digital scarcity. From an abstract point of view, Satoshi’s anonymity is believed to be a major contributor that allows Bitcoin to scale as an asset without bounds. Knowing that there isn’t a central individual behind a network that gains outsized power as a result of it holding trillions of dollars in value, is key to mass adoption in the eyes of many community members.

What is digital utility?

Digital utility pertains to the implementation of blockchain in applications that are used to deploy value (i.e. lending protocols, decentralized exchanges, and DAOs); the value deployed can come from network native sources, digital scarcity, or any other form of digital input. The purpose of networks in this force is to provide the infrastructure necessary to deploy said value. Native smart contracts, the use of Proof-of Stake (PoS), and frequent and impactful improvement measures are the differentiating factors that fuel digital utility and give it its unique composition and use cases.

Manifestation of Digital Utility in ETH and Other Networks

Holding nearly half a trillion dollars in value, Ethereum is the leading digital utility platform in the ecosystem. Other prominent utility-based networks include Binance Chain, Solana, and Terra. The top qualities of these networks that distinguish digital utility include native smart contract capabilities, Proof-of-Stake consensus mechanisms, and evolving policies around their supply, capability, and functionality.

Smart contracts are the engines that power the many decentralized applications (dapps) across utility-based networks. They are the piece of infrastructure that outlines and executes the underlying terms of an application, which encapsulates everything that makes up their supporting ecosystems (i.e. lending, borrowing, swapping, staking, and any DeFi app). Without the implementation of smart contracts, digital utility wouldn’t exist. Having smart contract capability baked into the networks’ Layer 1 (base layer) gives the contracts increased security and separates digital utility from digital scarcity.

Networks in this force primarily leverage a PoS consensus mechanism, which, unlike PoW, doesn’t require input costs relating to distribution, and includes premines or presales. Instead, transactions on PoS networks are approved by the random selection of validators in proportion to their holdings of the network’s native cryptocurrency. So,  validators with larger holdings are more likely to be selected to validate transactions than those who hold less. The absence of input resources allows transactions to be validated at a faster rate, which is critical to the functionality of utility-based networks. Solana, Terra, and Binance Chain are examples of PoS networks; Ethereum is a PoW network in its current state, but will migrate over to PoS pending the successful implementation of ETH2.0.

Improvement proposals on utility-centric networks are more frequent and often have larger impacts on their functionality and composition, when compared to their digital scarcity counterparts. For example, EIP-1556 (Ethereum Improvement Proposal) changed the network’s process for distributing network fees (gas). Gas was previously distributed to miners who held up the network, but is now burned and removed from the circulating supply as it is spent. Additionally, EIP-4488, a recent improvement proposal, is aiming at limiting the bottom line fee charged by the network. Changes that have impact on functionality and tokenomics are seen across all networks with a utility focus, which is an attribute necessary to their scope and is exclusive to the force of digital utility.

There’s been the argument that the BTC can have smart contracts and that ETH (or any other utility first network) can act as “super sound money.” While it is possible to bend each network to seemingly make the case, the fact is, by nature, digital scarcity isn’t the most efficient platform for utility, and digital utility doesn’t hold the most efficient framework for scarce, hard money. Thus both forces need each other in order to have the greatest impact.

Digital scarcity and utility have already begun working together in the digital and physical economies; which highlights the importance of their cooperative relationship, and suggests a deepening merge is on the horizon.

Quantifying the relationship of utility and scarcity in the digital economy offers insight into the already established intersection and its impact.

The minting of BTC on Ethereum has escalated exponentially over the last two years. As it currently stands, there is approximately 318,300 BTC minted on Ethereum, or ~1.52% of BTC’s maximum supply. This number has grown by nearly 114% over the last 365 days, and around 37% over the last six-month period. There is almost $16 billion of Bitcoin on Ethereum, at a market value of $50,000/BTC, which is ~3.1% of Ethereum’s market capitalization. The chart below highlights the historical growth in BTC on the Ethereum network. The steady upward trend suggests that BTC seldom leaves Ethereum (burned) after it has been minted, further promoting the fact that they work efficiently together.

Digital scarcity is a $1 trillion pool of value, and growing, of which utility has only begun to scratch the surface. There are hints from the traditional financial sphere that suggest the surface level relationship between the two forces isn’t necessarily a fad, and has the opportunity to accelerate; the potential impact of this is huge for both forces. To add perspective:

Signs of Acceleration to Come

Digital scarcity is being implemented into traditional finance products that digital utility is aiming to optimize and bring to new audiences. Some of these products include loan collateral, interest bearing accounts, and exchanges/swaps.

Platforms offering yield opportunities on BTC, like BlockFi and Celsius, and those offering crypto backed loans, like CEX.IO and Coinbase, have become widely popular around the world. The success of these groups, and all the others working in the same space, casts a spotlight on the importance of a cooperative relationship between digital utility and scarcity, and draws attention to its potential for a positive outcome.

The true explosiveness of blockchain and cryptocurrency, and their potential reach, is dismissed when perceiving digital utility and digital scarcity as competitors. In doing so, the technologies’ paths to adoption and improved use are blurred by metrics attempting to collate parallel forces that are fundamentally incomparable.